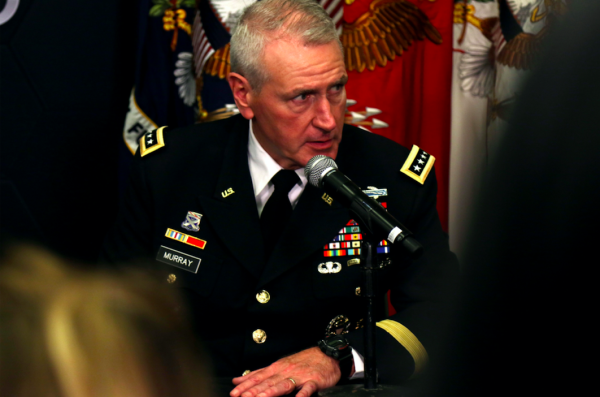 The Army may be celebrating its prized Army Futures Command (AFC) reaching full operational capability, but the organization's leaders still have quite a to-do list in front of them.

AFC commander Gen. John Murray briefed reporters on Thursday alongside Bruce Jette, the Army's Assistant Secretary of Acquisition, Logistics and Technology, on the progress of the Army's modernization roadmap and what's coming down the pipe to help soldiers soldiers win the conflicts of the future.

But while that lawmakers skirted questions on the war in Afghanistan during former Secretary of the Army Mark Esper's confirmation hearing for defense secretary this week, AFC's top priority remains, first and foremost, the soldiers fighting in conflict zones right now.

“The Army's first priority in terms of resources will always be to soldiers in contact,” Murray said on Thursday. “That's always been true, that will never change. And so we continue to focus on, in many ways, experimenting with new technologies in-theater.”

Those technologies “experimented” with in-theater of course won't be unproven prototypes, he said, but proven equipment that could be beneficial almost immediately. And if a unit isn't keen on a new piece of technology, Murray said, he's not going to “force anything on a unit or soldiers that they don't want.”

Instead, Murray said wants to grow knowledge within the Army about what AFC is working on; if a commander comes to them wanting a certain capability, they'll “be happy to provide it.”

For example, the 1st Security Force Assistance Brigade (SFAB) that returned from a nine-month deployment to Afghanistan in November was the first to test out the Integrated Tactical Network that AFC has been developing. Brig. Gen. Scott Jackson, commander of the 1st SFAB, also expressed interest in trying out a semi-autonomous supply vehicle that's being tested currently by soldiers with the 101st, and 10th Mountain Division.

One of the first things to go overseas, Murray said, will be the Next-Generation Squad Weapon. Army Brig. Gen. David Hodne said this week that an infantry brigade combat team will finally get their hands on both NGSW replacements for the M4 carbine and M249 starting in 2023, per Military.com.

AFC's university partners — namely the University of Texas and Texas A&M University — also have a few things coming in the next few years to further boost the work being done. Murray mentioned that UT is building a robotics lab in an old building, and A&M will soon be building a “soldier development center” out at a nearby satellite campus.

Other challenges facing AFC lie in the application of artificial intelligence, and developing autonomous vehicles to go off-road.

“If you're going completely cross-country, there are no lane markings, there are no street signs, there's no vehicles around you … to help you identify where you are,” Murray said. “That's not anything that's coming in the near-term, but as we start to look and increment out what comes next, I think that's probably it.”

There are a number of applications of A.I. on Murray's mind, including things like predictive maintenancec and algorithms that could help, for example, help weapons systems recognize a target. Key word “recognize,” Murray told reporters: while he knows people immediately think “The Terminator” when they hear about military A.I., the algorithm won't be the one pulling the trigger.

Either way, the conversation about A.I. is only going to get louder, and it's a conversation Murray says needs to be had.

“We need to start talking about it, we need to start thinking about it, about where as a country we want to go with artificial intelligence,” he said. “And I always remind people too this debate is not happening in other countries. Artificial intelligence is coming to a battlefield. It's not a question of if, it's just a question of when, and how far behind or ahead do we want to be when that happens.”