One year in, Army Futures Command is fully up and running. Here’s some of the new tech it’s been working on 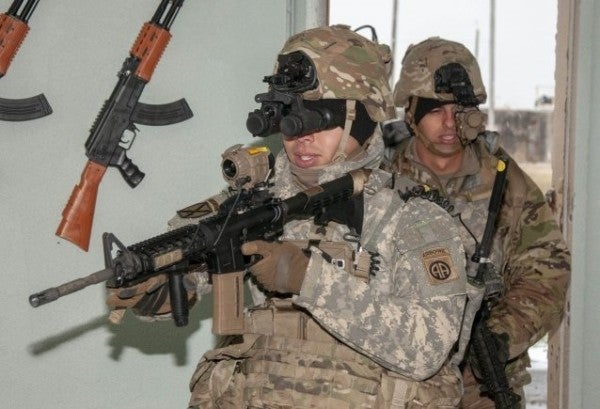 AFC Commander Gen. John “Mike” Murray told reporters at a technologies showcase on Tuesday that the command will be fully operational on July 31st before showing off everything AFC personnel have been working on over the last year, from night vision goggles and robotic vehicles to new air- and missile-defense capabilities.

One of the technologies on display, the Enhanced Night Vision Goggle-Binocular (ENVG-B), will end up in soldiers' hands sooner than they think: the 2nd Brigade Combat Team, 1st Infantry Division should get the first set of ENVG-Bs as soon as September 23 of this year.

Beyond the typical night vision functions, the system will allow soldiers to, among other things, fire from behind cover by integrating with the Family of Weapon Sights-Individual on the end of their weapon to see and engage a target.

Sgt. 1st Class William Roth, who has been heavily involved in testing the ENVG-Bs from the beginning, told reporters that he witnessed a soldier “lay on his back, with the rifle pointing downrange — so he was looking up at the sky with the rifle over his shoulder — and he was engaging successfully with 50-100 meter targets, dropping 'em.”

The goggles were praised by AFC Deputy Commander Lt. Gen. James Richardson as better than anything he'd experienced in his Army career.

“The idea is to minimize exposure of the soldiers, and maximize the effectiveness of your targeting,” Brig. Gen. Anthony Potts, who leads Program Executive Office Soldier, said.

Meanwhile, Army Futures Command is still chugging away on the Integrated Visual Augmentation System (IVAS) in development with Microsoft.

The IVAS brings in a wider field of view than the ENVG-Bs, performing similar functions to the night vision goggles in a small and lighter package while collecting data like soldiers' heart-rates and other performance metrics, Project Manager Col. Chris Schneider said.

Once the system is ready — which won't be for at least another year — it will will replace units' ENVG-Bs. That system will in turn trickle down to other units, bumping the ENVG-IIIs — which Potts said the Army is only just now starting to field — to units below them, and so-on.

The Army is also looking at integrating IVAS with the new Black Hornet nano-drones that started being used this summer, Schneider said on Tuesday; the expected testing for that capability will happen this October.

“I think we're tracking very well to integrate all sensor data onto the IVAS that we can move across a network,” Schneider said. “And so … whether it be a UAV or whether it be a ground sensor — any digitally formatted data that we can get to a soldier and then process, that's what we're working on.”

Augmented reality in the IVAS will be a game-changer for soldiers. One feature Schneider mentioned is language translation: Imagine the ability to look at a street sign while you're on patrol and have it change to English in the glasses you're wearing.

The Army's new Integrated Visual Augmentation system is a single platform that uses augmented reality where Soldiers and Marines can fight, rehearse, and train.(U.S. Army photo)

The IVAS is built on the Army's Synthetic Training Environment (STE), which will “converge current live, virtual, constructive and gaming environments into a single simulation training environment,” and the Army on Tuesday showed off One World Terrain (OWT), a pillar of the STE which helps soldiers map out a realistic, digital copy of any environment.

Army Spc. Cody Palmer with the 118th Infantry Division explained on Tuesday that OWT allows soldiers to break down an area of operations in-depth, showing them, for example, not just a street but everything on the street — doorways, alleys, and more.

By training with such realistic data, Palmer said, teams develop “muscle memory” of the area they'll be operating in.

“I go into this building, I know immediately there's a hallway to my right I need to keep clear,” he said. “I know that there's a doorway to my left that leads into the master bedroom with a shower in the right hand corner. I know that building before I have to breach and put my life on the line.”

OWT is expected to reach full operational capability in fiscal year 2023. Virginia developer, Vricon, was awarded a $94.7 million contract to build out a prototype in June.

The Army also showcased the Reconfigurable Virtual Collective Trainer (RVCT), which includes virtual training for both ground and aviation platforms. A contract was awarded at the end of June to Cole Engineering Services, Inc. to build a RVCT prototype, Defense News reported.

Not everything AFC's showed off was man-portable: the showcase also including models of the Robotic Combat Vehicles — which will start testing next spring — and Optionally Manned Fighting Vehicles; Next Generation Squad Weapon; and more of the AFC's primary focuses.

Murray told reporters that one of the most important aspects of developing the new technologies has been bringing in soldiers for early feedback, which he said is something “we did not used to do very well.”

SEE NEXT: The Scooter-Riding Youths Of Austin Are Proving To Be Key To Army Modernization