As the United States faces new challenges, the Pentagon has a simple focus in mind for the U.S. combat troops:... 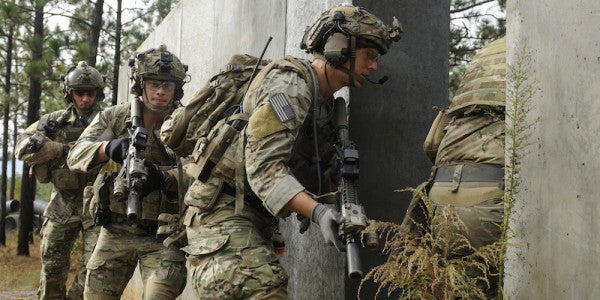 As the United States faces new challenges, the Pentagon has a simple focus in mind for the U.S. combat troops: spent less time on briefings and guard duty and more time taking warfighting to the next level. But to build the fighting force of the future, you need the right tools — and that’s exactly what the Defense Department is doling out to service members to make them stronger, faster, and more lethal than ever.

Here’s a look at some the next-generation gadgets coming to combat troops in the coming years — and how they power the future of the American warfighter.

The average U.S. Army soldier humps up to 140 pounds of gear in a given combat deployment; for Marines, it’s closer to 160. But rather then ditching bulky, over-designed body armor in favor of improved physical performance, there’s a more futuristic solution: a load-bearing exoskeleton.

Soldiers with the 10th Mountain Division are currently testing an experimental frame from Lockheed Martin ONYX exoskeleton that’s designed to provide additional support to the knees and hips. While Army officials are currently working out the kinks, Army Times reports that the new exoskeleton could end up downrange as early as 2021.

While the Army’s working on a extra support for your comfort zones, officials are also dreaming up a special little gadget ripped straight from Aliens.

In May, the Army Research Laboratory published footage of soldiers scrambling through an urban training exercise course with 22-pound M249 and 25-pound M240B machine guns affixed to the end of their ‘Third Arm’ harnesses. According to the Army, one sergeant rocking the third arm with a carbine “dove into a prone fighting position from a sprint … the Third Arm provided immediate stabilization to improve marksmanship for the soldier.”

After years in the making, the Army is finally planning on fielding the Enhanced Night Vision Goggle-Binocular to combat troops in the coming months.

The third iteration of the program first initiated in 2002 (and showcased publicly in July 2017), the Army claims the ENVG III “can summon up a picture out of darkness in seconds, allows soldiers to see in two directions at once, and updates the image continuously as the Soldier moves.”

Even more critically, night vision is now “untethered” from cumbersome goggles, routed wirelessly through a weapon scope that, in essence, allows warfighters to peek around corners. Given that the Army is spending half a billion to train its soldiers to fight wars underground, looking around corners in the dark will prove valuable capabilities.

As of October, Army researchers are on the hunt for industry prototypes for what it calls a Secure Intra-Soldier Wireless Module with Reduced Size and Power (ICW Chipset) project, a wireless system designed to reduce the load and power requirements of soldier communications gear.

The ICW technology, according to Military & Aerospace Electronics Magazine “seeks to link pieces of the infantry warfighter's kit, such as wearable computers, radios, and electro-optical rifle sights without cumbersome cabling and connectors in a similar way that people today link their smartphones and smart watches.”

Of course, this tech will require a system that’ll keep, say, Russian and Chinese hackers from mucking about with soldier communications. But at least it’ll cut down on the risk of tangling yourself in your own wires while on the battlefield.

Look, the Meal, Ready to Eat isn't necessarily the most cutting edge amenity in the wide, wide world of military technology, but it’s just as essential in keeping combat troops fed and happy.

And that’s where the newfangled pizza MRE comes in. In August, the Army announced that that the MRE pizza will arrive in soldiers’ hands by 2019. Not only is it purportedly quite tasty (or at least tolerable), it’s a long-lasting addition to soldier rations as well.