It can see through smoke and in near total darkness; it can translate written foreign languages and pull up detailed maps; it can rapidly acquire and identify targets. The Army's believes its new heads-up display is the future, and it's coming to an armory near you sooner than you think 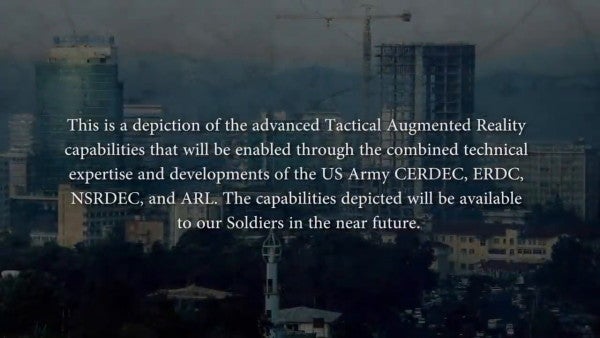 It can see through smoke and in near total darkness, translate written foreign languages and pull up detailed maps, and can rapidly acquire and identify targets. It's the Army's new heads-up display of the future, and it's coming to an armory near you sooner than you think.

Since late October, Army officials have been conducting the second of four “soldier touch points” (STP) — Army Futures Command's special name for prototype testing during the system's 24-month rapid acquisition timeline — at Fort Pickett in Virginia to solicit soldier feedback and flaunt the IVAS's capabilities for both warfighters and members ofthe media.

The system's current capabilities include, according to the Army statement, “a color see-through digital display that makes it possible for the user to access information without taking his eye off the battlefield; thermal and low-light sensors that make it possible to see in the dark, literally; rapid target acquisition and aided target identification; augmented reality and artificial intelligence.”

According to Business Insider, which recently tested the new system during a technology demonstration at Fort Pickett, the heads-up display overlays a three-dimensional map of the battlefield over a soldier's line of sight, automatically adjusting to compensate for obstructions like smoke or unpredictable changes in lighting — while identifying foreign objects in a warfighter's path.

“When terms like 'situational awareness' get thrown around time after time, it's easy to lose sight of what it really means,” Maj. Brad Winn, IVAS lead for the Pentagon's Soldier Lethality Cross Functional Team, said in the Army statement.

“In this case, one of the greatest capabilities of IVAS is Aided Target Recognition, a feature that gives users the ability to quickly identify anything or anyone in sight.”

It's not just infantry soldiers getting a taste of the IVAS: Jane's reports that senior Pentagon leaders, including Army Vice Chief of Staff Gen. Joseph Martin and James McPherson, who is performing the duties of Under Secretary of the Army, rolled up at Fort Pickett for a hands-on test of the IVAS in conjunction with the service's new Family of Weapon Sights – Individual (FWS-I) that wirelessly connects to a soldier's night vision goggles.

“Service leaders headed through the woods and into a building on a mission to test out the IVAS HUD's ability to recognize and register faces, pull up maps, and translate foreign characters,”Janes reports. “Leaders also demoed the integration of the [FWS-I] … into the IVAS HUD when they faced 'enemy combatants.'”

There are two more STPs ahead for soldiers to test the IVAS, according to the Army, one in the summer of 2020 and the last sometime in 2021.