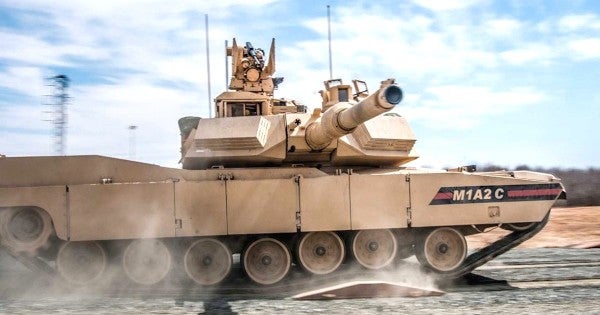 After a year and a half since the Army took delivery on the first of its souped-up new version of the M1 Abrams main battle tank, the Pentagon's Joint Systems Manufacturing Center in Lima, Ohio is ramping up to deliver the service's first full brigade of upgraded warhorses to bring the pain downrange.

The Lima News reports that the first full batch of M1A2 SEPv3 Abrams tanks (also known as the M1A2C) — likely around 87 for an Armored Brigade Combat Team — will be ready “sometime this summer,” according to JSMC plant manager Hank Kennedy said.

“We're in the throes of getting that together,” Kennedy told The Lima. “[The] first brigade is critical because we need to get (them) into the soldiers' hands so they can get trained on it and everything else.”

As of February 2019, the SEPv3 upgrade also includes the Israeli-developed Trophy HV hard-kill active protection systems that uses radar to detect incoming missiles and rockets then fires tiny projectiles to intercept them.

“The Abrams M1A2 SEPv3 is the first in a series of new or significantly improved vehicles that we will be delivering to the Army's ABCTs,” Maj. Gen. David Bassett, program executive officer for Ground Combat Systems, said when the first prototypes rolled off the assembly line back in 2017. “It is a great step forward in reliability, sustainability, protection, and onboard power which positions the Abrams tank and our ABCTs for the future.”

Which lucky soldiers will get to operate the first of the Army's upgraded Abrams tanks remains to be seen.

SEE ALSO: We Salute The Soldiers Who Named Their Tank 'Chuck Norris' After The Actor Hung Out With Them