This could be the Army’s next light tank of choice 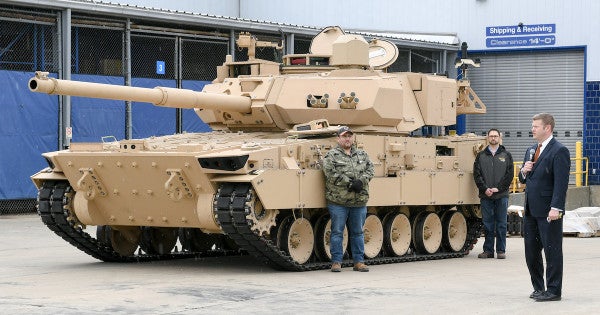 The Army is on the hunt for a light tank to boost the firepower of airborne and light infantry units against fortified enemies, and General Dynamics is ready to party.

The Army had previously selected GDLS and BAE Systems in December 2018 to deliver 12 MPF prototypes apiece to the service for operational testing and evaluation under two rapid prototyping contracts that totaled more than $750 million.

BAE had in March 2019 showcased an MPF technology demonstrator that, based on the M8 Armored Gun System, comes equipped with an 'Iron First' active protection system, Defence Blog reports.

The MPF is one of five next-generation combat vehicles being developed by Army Futures Command as part of the service's shifting focus from counterinsurgency to high-intensity multi-domain operations involving 'great power' rivals like China and Russia.

The lightweight vehicle “will be able to neutralize enemy prepared positions and bunkers and defeat heavy machine guns and armored vehicle threats during offensive operations or when conducting defensive operations against attacking enemies,” the Army previously announced.

Brig. Gen. Ross Coffman, director of the Next Generation Combat Vehicle Cross Functional Team, previously told Army Times that the MPF will function as a substitute for artillery in support of infantry brigade combat teams tasked with knocking out secure enemy locations.

“There’s no precision munition to remove bunkers from the battlefield, to shoot into buildings in dense urban terrain,” Coffman told Army Times back in 2018, adding that the MPF will be used to “disrupt, break in and breach those secure defensive zones.”