These rifles could be the Army’s next weapons of choice

Just days after the Army announced the selection of three defense contractors to whip up prototypes for the service's Next Generation Squad Weapon program, one gunmaker has already unveiled their candidates for the U.S. military's next great service rifle 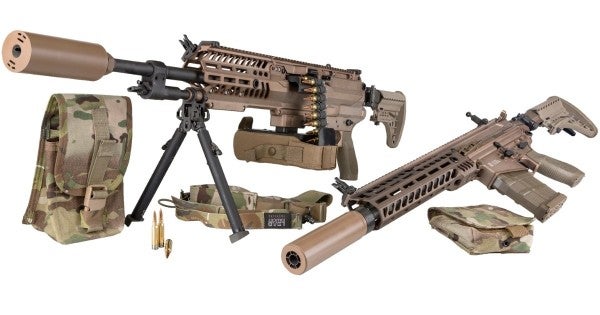 Just days after the Army announced the selection of three defense contractors to whip up prototypes for the service's Next Generation Squad Weapon program, one gunmaker has already unveiled their candidates for the U.S. military's next great service rifle.

Sig Sauer on Tuesday released photos of the rifle (NGSW-R) and lightweight machine gun (NGSW-AR) prototypes, both suppressed and chambered in 6.8mm hybrid ammunition, that will compete against General Dynamics-OTS and AAI Corporation Textron Systems to furnish the Army with replacements for its M4 carbine and M249 squad automatic weapon, respectively.

In 2017, the Army adopted Sig Sauer's P320 pistol as the M17/M18 under the service's Modular Handgun System program after a turbulent search and selection process.

“We are honored to have been selected for the Next Generation Squad Weapons program bringing increased lethality to the warfighter over the legacy weapons,” Sig Sauer president and CEO Ron Cohen said in a statement. “At the core of our submission is our newly developed, high-pressure, 6.8mm hybrid ammunition that is utilized in both weapons, and is a significant leap forward in ammunition innovation, design, and manufacturing.”

The company had previously showed off candidates for the NGSW program at the Special Operations Forces Industry Conference (SOFIC) in Tampa, Florida in May. Soldier Systems characterized these prototypes as “much more mature design” over earlier MCX-style carbine and .338 Norma Magnum machine gun concepts.

“The Sig Sauer NGSW-AR is lighter in weight, with dramatically less recoil than that currently in service, while our carbine for the NGSW-Rifle submission is built on the foundation of Sig Sauer weapons in service with the premier fighting forces across the globe,” Cohen said in a statement.

In late August, the Army chose Sig Sauer, General Dynamics-OTS, and AAI Corporation Textron Systems to deliver prototypes of both NGSW prototypes, as well as hundreds of thousands of rounds of 6.8mm ammo, within the next 27 months.