The latest upgraded version of the iconic Abrams Main Battle Tank has begun its slow roll off the assembly line,... 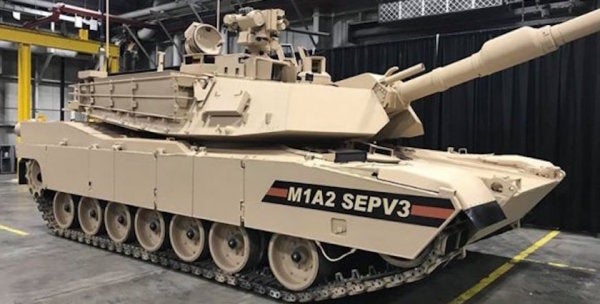 The latest upgraded version of the iconic Abrams Main Battle Tank has begun its slow roll off the assembly line, with the first of six M1A2 System Enhancement Package Version 3 production vehicles being delivered to the Army on Oct. 4.

Testing for the M1A2 SEPv3 commenced in 2015 and production is being conducted by General Dynamics Land Systems at the Joint Systems Manufacturing Center in Lima, Ohio and at the Anniston Army Depot in Anniston, Alabama, according to the Army.

“This version is the most modernized configuration of the Abrams tanks, having improved force protection and system survivability enhancements and increased lethality over the M1A1 and previous M1A2 variants,” Lt. Col. Justin Shell, the Army’s product manager for the Abrams, said in a statement.

The M1A2 SEPv3 will replace the M1A2 SEPv2, which has been in production since 2005. The National Interest reported last year that the Army will start fielding the upgraded tanks in the third quarter of fiscal year 2020 with the ultimate goal of remanufacturing the entire M1A2 SEP fleet into the new configuration.

“It is a great step forward in reliability, sustainability, protection, and on-board power, which positions the Abrams tanks and our [Armored Brigade Combat Teams] for the future,” Maj. Gen. David Bassett, program executive officer for Ground Combat Systems, said in a statement.

“Even in a fiscal environment that has greatly hampered our ability to move towards entirely new vehicles, the Abrams M1A2 SEPv3 shows we can still deliver meaningful and operationally relevant improvements,” Bassett added.

The original version of the M1 Abrams was fielded in 1980, replacing the M60 tank, and made its battlefield debut in 1991, during the first Gulf War, when nearly 1,900 M1A1 tanks deployed to Saudi Arabia to participate in the liberation of Kuwait.

The Abrams then spearheaded the assault on Iraqi fortifications in the subsequent invasion of Iraq, where it was featured in what is often called “the last major tank battle” of the 20th century,” the Battle of 73 Easting, which saw American and Allied forces swiftly defeat one of Iraq’s largest armored formations.

The tank also played a key role in the early phases of the second Iraq War, but has hardly been utilized in Afghanistan.

The SEPv3 is a significant upgrade to the Abrams, which is currently equipped with a 1,500-horsepower engine, a 120mm main gun, and composite armor. Shell said the new model “will be the foundation for future incremental system upgrades and can host any mature technology the Army deems operationally relevant.”

War is Boring called the SEPv3 a “much harder-hitting and better-defended tank with a new power system and network architecture,” even though it has “the same engine, suspension, main armament and basic layout” as its predecessor.

Enhancements include improved main gun accuracy, as well as a data-link for programmable munitions that make the tank compatible with new “smart cannon” rounds. There are also upgrades to the tank’s front and rear armor, bolstered by a built-in jammer to counter radio-triggered improvised explosive devices.

Meanwhile, the addition of a 1,000-amp generator will power new radios the Pentagon is developing, and a new auxiliary power unit installed beneath the armor will allow crews to quietly operate the tank’s electronics without turning on the main engine.

“These vehicles are not just about assuring our allies, or deterring or coercing potential adversaries,” Bassett said. “They are about compelling our enemies and winning the multi-domain battle.”