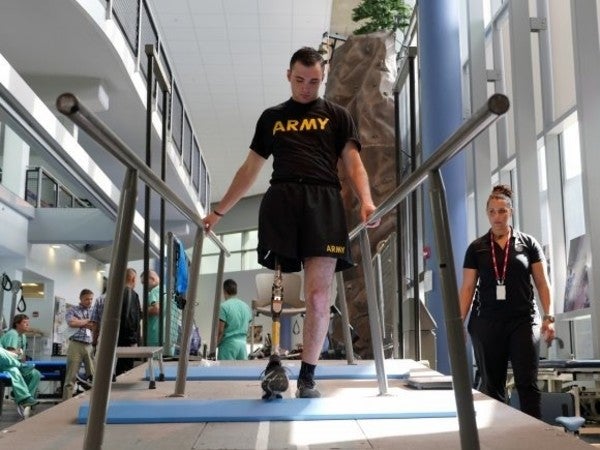 Army Spc. Ezra Maes was on a deployment to Poland when an accident almost took his life.

Maes, 21, was working as the loader on the main cannon of an M1A2 Abrams tank about a year into a deployment in support of Operation Atlantic Resolve.

On the second day of a rotation in Slovakia, he and two other crew members had fallen asleep when they awoke to realize their tank was starting to roll downhill.

The tank's man parking brake had failed, according to an Army release, and the emergency braking procedures the crew tried to initiate weren't working.

The tank started picking up speed, and was “careening down the hill at nearly 90 mph” before it eventually crashed into an embankment, the Army release says.

The collision of the tank caused Maes's leg to become caught in the turret gear, which then slid completely onto his leg.

Maes thought his leg was only broken, and was focused on getting out to help the gunner, Sgt. Aechere Crump, who was bleeding from her leg, and driver Pfc. Victor Alamo, who was stuck up front with a broken back.

“I pushed and pulled my leg as hard as I could to get loose and felt a sharp tear,” Maes said in the Army release. “I thought I had dislodged my leg, but when I moved away, my leg was completely gone.”

He began rapidly losing blood, and when he went to grab a tourniquet he began to feel lightheaded. So he began shock procedures, and made a tourniquet from his belt to slow the bleeding. Crump also used a belt to form a tourniquet and stop her own bleeding.

Maes called for her to radio for help, only to realize that the radio wasn't working.

Luckily, Maes' cell phone began ringing, and they realized it was the only phone with service. He sent a text and help arrived shortly afterwards.

Maes said that his last memory from the ordeal was seeing his sergeant major carry his leg on his shoulder back up the hill. He said in the release that he wanted to see if it could be reattached, “but it was pulverized.”

Maes also broke his shoulder, his pelvis in three places, and his ankle. He spent a total of four months in intensive care, but is now “immersed” in occupational and physical therapy at the Brooke Army Medical Center at Fort Sam Houston, Texas.

While it was a difficult road to recovery, both physically and emotionally, Maes says every day is a gift. Now, a year later, Maes is preparing to receive a “long-term prosthetic leg through a cutting-edge procedure,” during which surgeons plan to implant a titanium rod into the bone of his residual limb to attach the prosthesis.

“When something like this happens,” Maes said in the release. “It's easy to give up because your life won't be the same, and you're not wrong. Life will take a 180, but it doesn't have to be a bad thing. Don't let it hinder you from moving forward.”