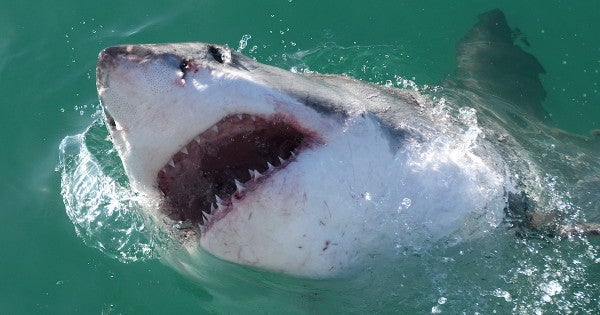 A gruesome shark attack on a North Carolina teenager on Sunday could have turned fatal had it not been for the furious fists of her Marine vet father.

Seventeen-year-old Paige Winter had a leg and several fingers amputated following a shark attack at a Fort Macon beach, saved from likely death by a series of blows from her father Charlie, according to a Sunday Facebook post by her grandmother Jane.

“Thank God our son was with her,” she wrote. “He said he punched the shark in the face 5 times before it let go.”

According to the New York Post, Charlie Winter is currently a firefighter with the nearby city of Havelock.

The teenager was evacuated to Vidant Medical Center on Sunday evening, where doctors treated hr for “deep lacerations to her leg, pelvic and hand areas,” according to ABC New affiliate WCTI-12.

“She is in good condition and receiving excellent care,” a Vidant Medical Center spokesman said in a statement on Sunday evening. “Her family expresses their appreciation for the first responders, the individuals on the beach who helped and her heroic father who saved her life.

“Despite this unfortunate circumstance, Paige is an unwavering advocate for the marine life and the animals who live in the water,” the statement added. “She wishes for people to continue to respect sharks in their environment and their safety.”

Paige's mother, Marcy, echoed that sentiment in note to a GoFundMe page that quickly surpassed its $5,000 goal in less than 12 hours after the attack.

“Paige is out of surgery and awake, she's still pretty groggy but cracking jokes,” she wrote. “She wants everyone to know that sharks are still good people.”

Who needs a bigger boat when you have a Marine's fists?

SEE ALSO: The Darkest Moment In 'Jaws' Had Nothing To Do With *That* Shark