What is the terrifying truth behind this Pentagon mystery? 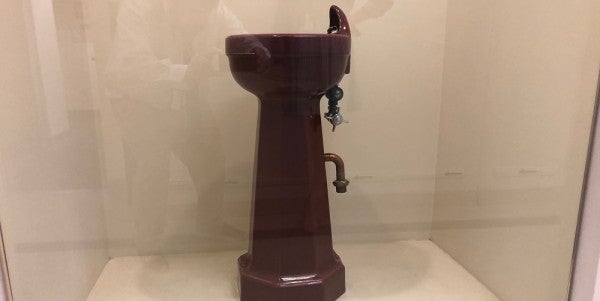 Hear me readers: Your friend and humble narrator needs your assistance.

Those of us who have long been inside the Five-Sided Fun-House have grown accustomed to some of the building's eccentricities. For example, not too far from this reporter's cubicle, a purple water fountain sits encased in glass along with a plaque that says no one knows how or why this particular Pentagon water fountain is made out of purple marble.

“As all legends go, no one is quite sure of the origin of this 'Purple Miracle,'” the plaque says. “However, one fact is certain. Of the 685 water fountains in the Pentagon, only one is purple. (Were the original Pentagon engineers one fountain short and given the option of taking the purple water fountain to fill the void?)

So the official story is the Purple Water Fountain appeared one morning like the Obelisk in “2001.” (For those of you born after the 60s, “2001” was one of the movies baby boomers loved to watch while high. The other was “Fantasia.”)

This reporter's heroic colleague Haley Britzky, who joined the Pentagon beat in January, has endeavored to solve one of the military's second-greatest riddles. (The biggest mystery is whether “first sergeant” in the Army's first “Be All You Can Be” recruiting commercial was an actor or an actual soldier.)

But so far, no one has emerged with the true story behind the mysterious water dispenser.

That's why we are turning to you, oh wise ones. You are our Obi Wan Kenobi – our only hope.

Surely one of you reading this story has evidence of the Purple Water Fountain's origin story. If so, it's time to put this burning question to rest.

All other conventional methods of finding the truth behind the Purple Water Fountain have been exhausted. (This reporter is tempted to call the guy from the History Channel who says aliens built Stonehenge.)

Even Steve Vogel, author of “The Pentagon: A History” was stumped about who – or what – is responsible for the Purple Water Fountain.

“I looked into it as part of my book research, and long story short, no one really knows,” Vogel said in an email to Task & Purpose. “None of the old-timers I spoke with really knew. Certainly, it has functioned as a navigation marker, but that's not the reason it was installed. The story that it was for African-American workers is false (the Army did initially plan segregated restrooms, but that was vetoed by FDR). Given there was only one purple fountain and many thousands of African American workers from the start, the idea is ridiculous.”

“One theory I've heard that strikes me as plausible is that a water fountain needed to be replaced, and that the contractor given the job had a purple fountain they wanted to get rid of,” he continued.

With the experts stumped, we are issuing a call out for information on the Purple Water Fountain. Please respond to this story so Haley can be the first person to crack this cold case.

Whoever provides accurate information gets a free drink in the Fighter Pilot Bar. (Though your definition of “free” might by slightly different from mine.)

SEE ALSO: Navy pilots are reporting more UFOs. Are they from Russia, China, or somewhere beyond?