There’s Big Trouble Brewing Between The US And China

Your humble Pentagon correspondent does not normally delve into geo-political affairs, but it seems fairly clear the United States’ relationship... 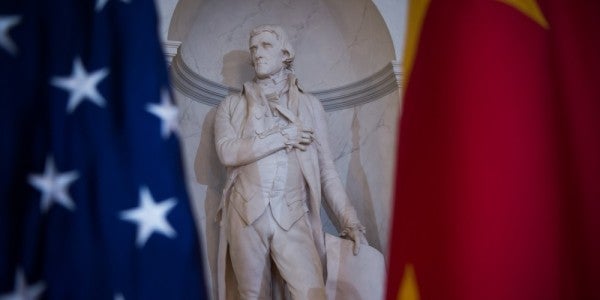 Your humble Pentagon correspondent does not normally delve into geo-political affairs, but it seems fairly clear the United States’ relationship with China really sucks right now. In fact, if the two countries were a couple that lived together, one of them would be sleeping on the couch.

Every day seems to bring a new U.S. grievance against China, including revelations that the Chinese bugged servers used by the Pentagon and CIA; the cancellation of Defense Secretary James Mattis’ visit to China after the Chinese government refused to allow Mattis to meet his counterpart; and a Chinese destroyer coming within 45 yards of the Navy destroyer USS Decatur in the South China Sea.

Add to that the ongoing trade war between the two countries and the Pentagon’s latest efforts to divest from Chinese manufacturers that make parts for weapons systems, and it’s clear that the two countries are in an escalating feud that is playing out on the world stage.

Unlike previous crises, both economic and military relations with China are deteriorating simultaneously, and no one has emerged who is willing to save the situation, Cheng told Task & Purpose.

Ever stoic, Mattis has tried to assure reporters that China and the United States can still find ways to work together. Speaking to reporters on Monday, he sounded a lot like dad telling the kids that he and mommy are headed to marriage counseling.

“We’re just going to have to learn how to manage this relationship,” Mattis said while flying to Paris. “By ‘we’ I mean ‘we; — China and us – plus other nations who are affected. And we'll sort this out.”

One flashpoint between the two countries remains the South China Sea, where China is building man-made islands to expand its territorial boundaries into contested waters that are claimed by other countries, such as the Philippines. The U.S. government maintains that the man-made islands are in international waters and it makes the point by sending military ships and planes near the islands on “freedom of navigation operations.”

The Chinese military frequently warns U.S. ships and planes to stay away from the islands, but on Sept. 30 a Chinese destroyer kicked things up things up a notch by coming dangerously close to the USS Decatur while the Navy ship was sailing off the Gaven and Johnson Reefs in the Spratly Islands.

Gaven and Johnson Reefs in the Spratly Islands.Courtesy if the Asia-Maritime Transparency Initiative at the Center for Strategic and International Studies.

“The PRC [Chinese] destroyer conducted a series of increasingly aggressive maneuvers accompanied by warnings for Decatur to depart the area,” Cmdr. Nate Christensen, a spokesman for U.S. Pacific Fleet, said in an email. “The PRC destroyer approached within 45 yards of Decatur’s bow, after which Decatur maneuvered to prevent a collision.”

The Chinese destroyer was using a maneuver that the U.S. and Soviet ships practiced during the Cold War called “shouldering,” in which one ship tries to put its bow in front of another vessel to force it to turn away, said retired Navy Cmdr. Kirk Lippold, who was captain of the destroyer USS Cole when Al Qaeda attacked the ship on Oct. 12, 2000, killing 17 sailors.

Shouldering proved so dangerous that the United States and Soviet Union agreed to limit the maneuver as part of the 1972 Incidents at Sea agreement following a series of collisions. Still, a Soviet frigate collided with the cruiser USS Yorktown in 1988.

“When the Soviet Union became Russia, that agreement was still maintained in force,” Lippold told Task & Purpose. “The Chinese have never wanted to maintain any agreement like that. They don’t want to be bound by any strict protocols by how ships, aircraft, or submarines operate near each other because they want to have the flexibility to do what they want.”

The fact that a Chinese warship tried to shoulder the Decatur is evidence that China is carrying out its strategy of pushing U.S. influence out of the South China Sea, Lippold said.

So it appears that the United States and China are on a collision course – just like the Decatur and the Chinese destroyer – but Vice President Mike Pence said on Thursday that the two countries do not have to be adversaries.

“As our National Security Strategy states: We should remember that ‘competition does not always mean hostility,’ nor does it have to,” Pence said during a speech at the Hudson Institute think tank in Washington, D.C. “The president has made clear, we want a constructive relationship with Beijing where our prosperity and security grow together, not apart. While Beijing has been moving further away from this vision, China’s rulers can still change course and return to the spirit of reform and opening that characterize the beginning of this relationship decades ago. The American people want nothing more; and the Chinese people deserve nothing less.”

It’s worth remembering that when the United States and Japan were in a similar situation more than 70 years ago, international tensions exploded into war one Sunday in December.