Your next CNO: Adm. Bill Moran nominated to lead the Navy

"Adm. Moran is an extraordinary leader who has been a stalwart partner and advisor," Navy Secretary Richard Spencer said in a statement. "I look forward to working with him in the years ahead when he is confirmed." 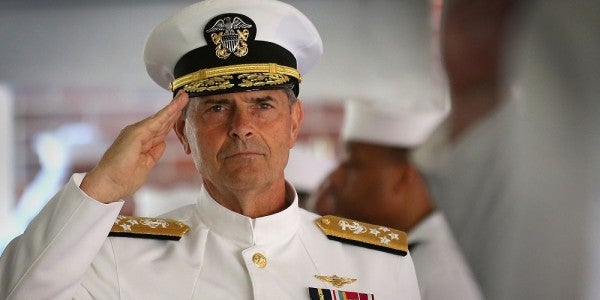 “I'm honored and deeply humbled by the nomination and look forward to working with Congress during the confirmation process,” Moran said in a statement.

A P-3 Orion pilot by training, Moran has served as vice chief of naval operations since May 31, 2016. If confirmed by the Senate, he would replace Adm. John Richardson within the next few months.

“Adm. Moran is an extraordinary leader who has been a stalwart partner and advisor,” Navy Secretary Richard Spencer said in a statement. “I look forward to working with him in the years ahead when he is confirmed.”

Originally from Newburg, New York, Moran graduated from the U.S. Naval Academy in 1981 and went on to serve on the staffs of the chief of naval personnel and U.S. Indo-Pacific Command.

Should he be confirmed by the Senate, Moran will take the helm at a time when the surface fleet is still recovering from decades of cutbacks and neglect that culminated in two deadly ship collisions in 2017 that claimed the lives of 17 sailors.

After identifying the root causes for the collisions, the Navy has extended training for surface warfare officers to make sure bridge watchstanders know exactly what to do in potentially dangerous situations.

“We need to build confidence back in the force,” Moran said in January 2018 when he visited the Surface Warfare Officers School in Newport, Rhode Island. “I think part of that includes giving commanding officers more time for training. But we also need to look at proficiency and how we define and measure it. We'll continue to look at these things and get after them.”

Meanwhile, the Defense Department countering China and Russia its main focus. The Navy's role in this strategy includes conducting Freedom of Navigation Operations in the South China Sea despite threats from the Chinese military. In September, a Chinese warship came within 45 yards of the destroyer USS Decatur on such a mission.

Richardson said that Moran is well suited to meet the current security challenges facing the Navy.

“He has been central to the Navy adopting a fighting stance in this great power competition,” Richardson said in a statement. “As I turn over and go ashore, I will rest easy knowing that, pending confirmation, Adm. Moran has the watch.”