After more than a decade of research and development and upwards of $500 million in funding, the Navy finally plans on testing its much-hyped electromagnetic railgun prototype on a surface warship in a major milestone for the beleaguered weapons system, Navy documents reveal 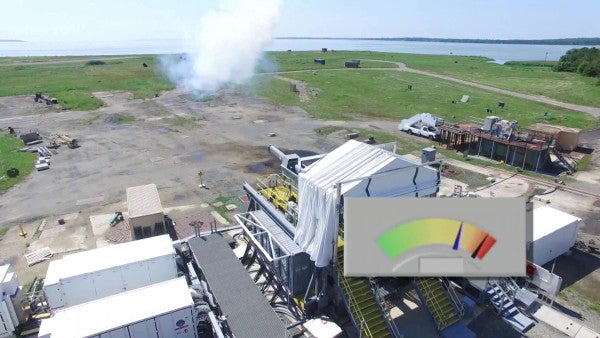 After more than a decade of research and development and upwards of $500 million in funding, the Navy finally plans on testing its much-hyped electromagnetic railgun on a surface warship in a major milestone for the beleaguered weapons system, Navy documents reveal.

The Navy's latest Northwest Training and Testing draft Supplemental Environmental Impact Assessment (NWTT EIS/OEIS), first detailed by the Seattle Times on Friday, reveals that ” the kinetic energy weapon (commonly referred to as the rail gun) will be tested aboard surface vessels, firing explosive and non-explosive projectiles at air- or sea-based targets.”

“The system charges for two minutes and fires in less than one second,” the 1,800-page assessment states. “The system is shielded so as not to affect shipboard controls and systems. The amount of electromagnetic energy released from this system is low and contained on the surface vessel.”

It's unclear at this time exactly which vessel will play host to the new weapons system. Back in 2015, Naval Sea Systems Command had announced pans to test the railgun aboard the Spearhead-class expeditionary fast transport USNS Trenton (a substitute for the USNS Millinocket) off the coast of Florida in 2016, but that test was subsequently delayed.

The Navy has spent years test-firing the railgun at the Naval Surface Warfare Center Dahlgren Division in Virginia, but conducting a tactical demonstration of the weapon from an actual surface vessel would constitute a significant advance for the beleaguered system. Generating the railgun's electromagnetic fields requires a capacitor base that only “electric warships” like the USS Zumwalt can currently generate, as Task & Purpose previously reported in December 2017, while other surface vessels would require a major overhaul to incorporate the “pulsed-power architecture” capable of loosing off multi-shot salvos.

While the Navy NWTT EIS/OEIS appears to indicate that service may have cracked the code for power generation, the success of the railgun is also contingent on the development of a universal “common mount” for equipping surface vessels with a tactical version of the ONR prototype. And as Task & Purpose also previously reported, that mount isn't just a technical challenge, but a political one: a 2016 House Armed Services Committee report noted that lawmakers were increasingly worried that changing Pentagon priorities would end up nuking funding for a mount and resigning the system to an R&D limbo of sorts.

In recent years, the Pentagon's Strategic Capabilities Office was shifting its energy focus towards the hypervelocity projectiles (HVP) that were originally developed as the specialized ammunition for the railgun. SCO quickly realized the HVP was just as effective when fired from conventional artillery, and the Navy test fired the HVP from the USS Dewey's Mk 45 five-inch deck guns during the 2018 Rim of the Pacific (RIMPAC) in August 2018.

Those changing priorities appeared set in stone as recently as February 2019, when Chief of Naval Operations Adm. John Richardson declared the railgun ” case study that would say, 'This is how innovation maybe shouldn't happen.'”

“We've learned a lot and the engineering of building something like that that can handle that much electromagnetic energy and not just explode is challenging,” Richardson told an audience assembled at the Atlantic Council at the time. “We're going to continue after this — we're going to install this thing, we're going to continue to develop it, test it … It's too great a weapon system, so it's going somewhere, hopefully.”

Even with a shipboard demonstrator, however, it's unlikely the railgun will see action as an armor-liquefying superweapon. A June 2017 Congressional Research Service report indicated that while the Navy “originally began developing as a naval surface fire support (NSFS) weapon for supporting U.S. Marines operating ashore,” the branch subsequently determined that the weapon “also has potential” for defending surface vessels from incoming missiles.

Still, the arrival of a shipboard tactical demonstrator can't get here soon enough. In December 2018, photos surfaced of the Chinese navy Type 072III-class landing ship Haiyang Shan conducting sea trials with a railgun housing mounted on its bow less than a year after it was first spotted with the supergun while docked at a shipyard, well ahead of the U.S. intelligence assessment's estimated Chinese fielding date of 2025

With tensions between the United States and China at an unusual high amid increasing freedom-of-navigation operations in the South China Sea, the Navy may end up needling all the firepower it can get — or at least the perception that it's actually holding its own in the new directed energy arms race.

WATCH NEXT: Does China Have It's Own Electromagnetic Railgun?