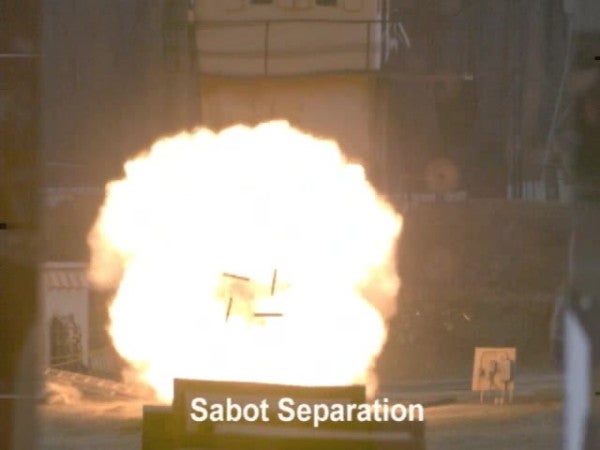 The U.S. Navy quietly test-fired 20 supersonic projectiles originally intended for the service's futuristic electromagnetic railgun from the conventional deck guns during an international military exercise at sea last summer, according to a new report from the U.S. Naval Institute, signaling a potentially significant boost in the Navy's surface warfare capabilities amid challenges from competitors like China.

Unnamed Navy officials told USNI News that the USS Dewey fired off 20 of the next-generation hypervelocity projectile — a supersonic shell capable of striking targets up to 100 nautical miles away at speeds approaching Mach 6. Originally developed as ammunition for the Office of Naval Research's vaunted electromagnetic railgun system, the Dewey used its Mk 45 five-inch deck guns during the 2018 Rim of the Pacific (RIMPAC) exercise to test out the speedy new round.

U.S. defense officials had previously announced its intent to test-fire the HVP shells developed for ONR by BAE Systems in January 2018, the report signals a major step forward for a critical news capability for the U.S. surface fleet.

In 2016, officials in the Pentagon's Strategic Capabilities Office began shifting Big Navy's directed energy priorities towards simply proliferating the HVP to conventional powder weapons like the Army's 155mm howitzer rather than relying on the increasingly expensive and complicated railgun system.

Indeed, BAE's contract with ONR and SCO states the intended applications of the HVP to “the Navy 5-Inch; Navy, Marine Corps, and Army 155-mm systems; and future electromagnetic (EM) railguns.”

But rather than see action as an offensive weapon, it's more likely those Mk 45-fired HVPs will largely help supplement existing missile defense capabilities for surface vessels, if only for cost purposes. As USNI News noted, the standard Evolved Seasparrow Missile or Rolling Airframe Missile cost several million dollars apiece. By contrast, the Navy's PEO Integrated Warfare Systems office put the cost of an HVP around $85,000, as HVP program manager Vincent Sabio stated in January 2017.

“We need to be able to address (all) types of threats: subsonic, supersonic; sea-skimming, land-hugging; coming in from above and dropping down on top of us,” Sabio said at the time. “There are many different trajectories that we need to be able to deal with that we… cannot deal with effectively today.”

The need to deal with supersonic threats may be here sooner than expected, especially from the so-called “great power competition” that the Pentagon sees as the greatest threat to U.S. national security: In December, photos appeared to show the China's electromagentic railgun — and, presumably, its own arsenal of supersonic HVPs — ready to rule the high seas.