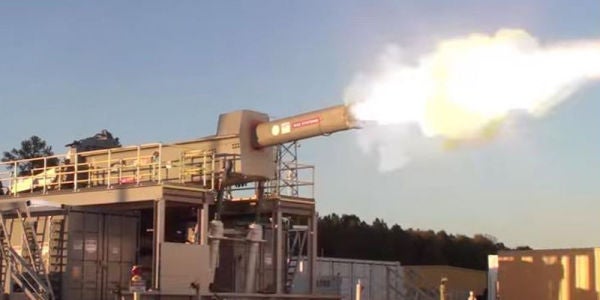 As part of its proposed $171.5 billion fiscal year 2018 budget request, the Navy carved out a hefty $2 billion for a suite of futuristic weapons systems ripped straight from the pages of a science-fiction flick. And a good part of that cash is going toward the service’s much-touted electromagnetic railgun: According to a new report from the Congressional Research Service, the service is on track to equip guided-missile destroyers and cruisers with the fancy launcher within the next 10 years. But despite this progress, it appears that the next-generation cannon won’t immediately see combat the way the Navy originally planned.

Sounds arcane, sure, but it means that the next-generation weapons are closer than ever to seeing full integration into Navy vessels. BAE, currently at the beginning of year-long multi-shot tests at Naval Surface Warfare Center Dahlgren Division in Virginia, plans on delivering its prototype to the Navy for branch testing as early as next year; General Atomics plans on testing its cannon at the Dugway Proving Ground in Utah and “ a surrogate cruise missile” by 2018, National Defense reports.

All of this bodes well for a much-anticipated (and much-hyped) railgun project as Congress dives into the Department of Defense’s fiscal year 2018 budget request. But the recent CRS report suggests that the prototype weapons systems the Navy will eventually mount on Spearhead-class expeditionary fast transports, like the USNS Trenton, won’t be used downrange to defeat enemy armor and wreak havoc on critical infrastructure. Instead, they’ll likely focus on a less dignified task: intercepting incoming missiles.

In the June 9 report, Naval Affairs Specialist Ronald O’Rourke checks in on the status of three of the Navy’s most futuristic weapons that have been under development for years — solid state lasers, the deliciously destructive hypervelocity projectiles, and our beloved railgun. The report, compiled to help Congress assess elements of the DoD’s budget request, doesn’t just detail the systems’ operational status but provides a window into how the Navy is framing its moonshot weapons systems before those cost-conscious lawmakers who have final say into how the fleet goes to war.

To wit, there are no fearsome visions of the tank-shredding, bunker-busting, hull-puncturing carnage that usually accompanies footage of the electromagnetic railgun at work. Instead, the report focuses on the technologies’ strategic application as additional surface defenses against anti-ship cruise missile and ballistic missiles. “The Navy originally began developing EMRG as a naval surface fire support (NSFS) weapon for supporting U.S. Marines operating ashore, but subsequently determined that the weapon also has potential for defending against ASCMs and ASBMs,” explains O’Rourke. Sure, ONR is still thinking about fire support, but for lawmakers the issue is missile defense.

This narrow presentation doesn’t just understate the railgun’s offensive potential but supersedes it totally in favor of most cost-effective systems. As a result, the document focuses primarily on solid state lasers, which currently have the beam power to destroy unmanned aerial vehicles and small boats that, with the appropriate power source, counter incoming munitions without the excessive costs of the $976,000-a-missile Navy SAM — or even the $25,000 HVP loaded into a state-of-the-art railgun. And with the Pentagon’s E-Ring already in the midst of a laser craze, the remaining engineering challenges of the electromagnetic railgun — barrel life, power systems, and ship integration, per the CRS report, all of which require costly new materials and extended energy efficiency — may simply dissuade lawmakers from pursuing the latter.

This may, of course, be totally fine with the Navy. In recent years, branch officials have slowly walked back the rising hype surrounding the futuristic cannon, especially since the realization that the railgun’s specialized HVP shells are just as deadly out of the barrel of, say, an M777 howitzer on a Marine firebase downrange. “We thought railguns were something we were really going to go after,” Deputy Defense Secretary Robert Work stated in May 2016, “but it turns out that powder guns firing the same hypervelocity projectiles gets you almost as much as you would get out of the electromagnetic railgun, but it’s something we can do much faster.”

But something tells us that, with more than a decade of research and development under their belt, Pentagon planners are more inclined to couch the railgun’s terrifying power in the more utilitarian packaging of missile defense — and lawmakers may respond to the Navy’s wink-and-nod in its fiscal 2018 budget request in kind. Just consider HASC chairman Rep. Rob Wittman’s praise of the system following a visit to Dahlgren back in February.

“The resiliency of the gun, the barrel, the ability for … multiple fires without having to replace the barrel, the projectiles, the pulsed power units, the size of the pulsed power units, the size of the batteries, all those things … are getting smaller are getting more efficient,” Wittman told National Defense in June. “The key now is to make sure that it goes through its testing regime, make sure we understand what it can do, put it onboard a ship operate it onboard a ship. All those things are on track.”

On paper, the Navy’s railgun seems doomed to a pedestrian life of knocking missiles out of the sky. But if the ONR and its contractors can keep lawmakers enthralled with the futuristic vision of the terrifying murder cannon long enough to rival other systems in power and firing capacity, who knows what the future may hold.