The Stoner 63 machine gun is one of the most powerful U.S. military weapons platforms you may never have heard... 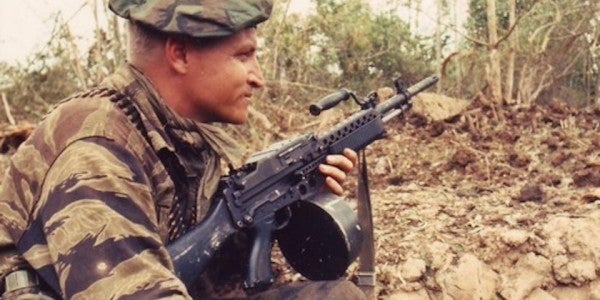 The Stoner Machinegun, produced in the 1990s and posted by Arms of The 80s on Jan. 1 is a delightful 30-minute meditation on a powerful weapons system, as seen through the eyes of Walsh, a 26-year SEAL veteran described by Military.com as an “outspoken renegade and consummate survivalist” who was among the first U.S. troops to work their way up Vietnam’s Mekong Delta as part of the Mobile Riverine Force in 1967.

As one of the earliest modular weapons systems, the Stoner was designed to maximize firepower in a lightweight, compact platform. The multi-use receiver offered up six distinct weapons configurations, from a folding-stock carbine to a solenoid-operated fixed machine gun for mounting on a ground vehicle or aircraft. And although Stoner embraced 5.56mm NATO ammo over 7.62mm rounds due to weight considerations (a trade-off that the Department of Defense is grappling with today), the average 5.56 bullet fired from a 63A light machine gun variant could penetrate standard U.S. body armor (and 4.5 inches of pine boards) at 600 yards, according to its systems pamphlet published in Death in the Delta: Diary of a Navy SEAL.

While the Stoner 63 was eventually replaced by the sassy but fabulous M249 Squad Automatic Weapon and most of the machine guns destroyed, Stoner fever persists today. In August 2017, Knight Armament unveiled a Stoner X-LMG5.56mm machine gun that, according to We Are The Mighty, completely bypasses the need for such a complicated buffering system, without extra recoil. Based on his testimony in The Stoner Machinegun, the longevity of the Stoner 63’s reputation would probably make Walsh smile today.