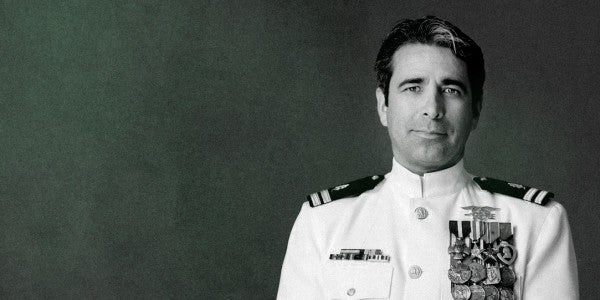 On Oct. 25, 2003, Lt. Mark Donald, a Navy SEAL medic, was on patrol in Afghanistan as part of a joint American-Afghan convoy. But for two whole years, he was not able to speak of the valorous actions he took on that day.

While driving along a dry riverbed in Paktika province, a rocket-propelled grenade hit the canyon, throwing Donald’s vehicle up in the air, rocking all the men inside.

“The vehicle slammed to the ground with a force that threw us around like rag dolls,” Donald wrote in his 2013 book, “Battle Ready: Memoir of a SEAL Warrior Medic.”

A second RPG hit the rig ahead, and an onslaught of insurgents followed, attacking the entire convoy. Donald immediately leapt from his vehicle and began returning fire.

Acting alone, Donald managed to drag the Afghan commander to safety, according to his citation. He then proceeded to pull his rig’s driver, wounded and trapped under his steering wheel, behind the vehicle to protect him from further injury. At one point, Donald used his own body to shield one of the men while triaging him. William “Chief” Carlson and Christopher Glenn Mueller, however, were mortally injured.

But Donald continued working, finding more wounded Afghan soldiers in the two of the vehicles. He and the unharmed men could have taken cover in a nearby ditch, but Donald stayed and worked to stabilize as many as he could.

“It was either leave the men or stay and die,” he wrote in his book.

After everyone was tended to, Donald took charge of an Afghan squad and organized a counterattack, leading them to fight off the ambush. He continued to fight and triage even though he was wounded by shrapnel and bullets. He also arranged for their medical transport.

Before treating to his own wounds, Donald swept the area and learned that an enemy ambush had attacked another joint unit 200 meters away. Knowing more men could need medical treatment, he ran to the ambush, exposing himself to heavy machine gun and small arms fire and found two wounded personnel who needed his attention — one Afghan and one American.

Despite his own injuries, intense insurgent fire, and the threat of nearby Army AH-64 Apache helicopter rocket fire, Donald still manage to lead the soldiers the 200 meters back to safe positions, as well as coordinate the evacuation of the wounded troops.

For his actions that day, Donald received the Navy Cross, the second highest award for distinctive valor. Because of the confidential nature of his mission, his name was redacted from the award citation and his identity was kept secret for more than two years after it was given. Donald also received a second medal — the Silver Star — for combat actions a month later. He is one of just a few individuals in history who has received both the Navy Cross and Silver Star.