UNSUNG HEROES: The Marine Gunny Whose Incredible Actions Earned Him The Nickname ‘Hero Of Nasiriyah’

On March 23, 2003, three days after American forces crossed the berm into Iraq, Gunnery Sgt. Justin LeHew of the... 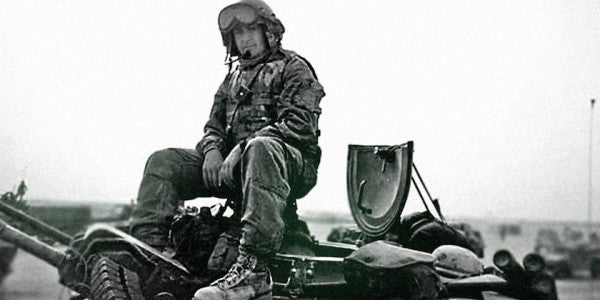 On March 23, 2003, three days after American forces crossed the berm into Iraq, Gunnery Sgt. Justin LeHew of the 2nd Assault Amphibian Battalion and his Marines were en route to the embattled city of Nasiriyah when the unit’s lead element came under heavy fire. Part of that lead element was a convoy with the Army’s 507th Maintenance Company, which had made a wrong turn and veered directly into enemy-held territory. A fierce battle ensued.

According to LeHew’s Navy Cross citation, he and his crew were dispatched to rescue the 507th soldiers. Among the beleaguered troops was Pfc. Jessica Lynch, who, along with five other soldiers, was captured by Iraqi forces and held for 21 days. Eleven other soldiers with the 507th were killed in the ambush.

Later, in a 2011 interview with a Huffington Post reporter, LeHew described the situation on the ground that day as “madness and chaos.” The ambush and the subsequent rescue effort were only the start of a bloody and protracted urban firefight now referred to as The Battle of Nasiriyah. For his courage and incredible leadership that day, LeHew would come to be known as the “Hero of Nasiriyah.”

and helping recover the bodies of the fallen, LeHew led his Marines en route to a bridge spanning the Euphrates River, all while under a constant attack. Their momentum was soon halted, however, when one of the unit’s amphibious assault vehicles was struck by rocket-propelled grenades.

“The vehicle came to a rolling halt right in front of us and I saw the crewmen who were on fire but still moving,” LeHew told the Huffington Post. “They were hanging out of the hatches or maybe trying to crawl out and then men that were in the back were falling out and they were on fire.”

LeHew and a corpsman sprinted to the burning vehicle, where they began treating the wounded, including one Marine whose leg had been amputated by the blast. Once the casualties were evacuated, the surviving Marines, LeHew included, proceeded into an alleyway dubbed “ambush alley.” There they were again engaged by a hellish barrage of enemy fire, including rocket-propelled grenades, mortars, and tank rounds. The number of casualties on both sides of the fight continued to mount.

Then, in an incident later recognized as one of the bloodiest “friendly-fire” incidents of the Iraq War, American A-10s accidentally strafed the Marines. “When I started triaging people,” LeHew recalled, “most of the ones I dealt with still had their limbs and they were hit with fragmentations, not gunshot wounds. It was friendly fire from the A-10s.”

Eighteen Marines were killed in ambush alley on March 23, as were hundreds of Iraqi troops.

The following year, in August 2004, LeHew once again proved his mettle in the Iraqi city of Najaf, where he earned the Bronze Star with Valor. Looking back on his time in combat years later, LeHew told Military Times, “Even in those crappy situations, the stuff that you saw other people doing — the young Marines around you, the corpsmen, and everything else — those memories that you’re really so proud of sort of subdue those other memories.”

LeHew, who was inducted into the Ohio Military Hall of Fame in 2012, is currently a sergeant major.