Mattis’ Response To The London Attack: ‘We Don’t Scare’

On Saturday, ISIS claimed responsibility for the vehicle and stabbing spree that killed seven civilians and injured more than 50... 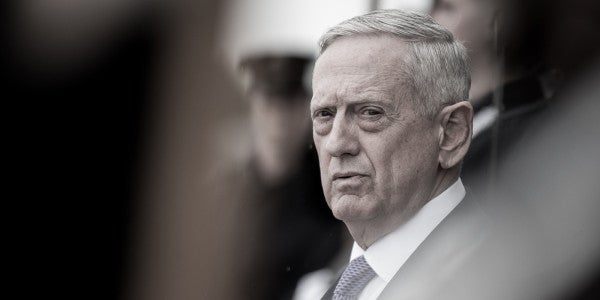 On Saturday, ISIS claimed responsibility for the vehicle and stabbing spree that killed seven civilians and injured more than 50 others near London Bridge in the heart of the United Kingdom’s capital, the third terror attack to strike the country in as many months. But the terrorists didn't scare Londoners, who fought back against their attackers with bottles and chairs — and they sure as hell don’t scare U.S. Secretary of Defense James Mattis.

ISIS “thinks that by hurting us, they can scare us,” Mattis said Monday morning. “Well, we don't scare.”

Mattis appeared alongside Secretary of State Rex Tillerson at the annual Australia-U.S. Ministers Conference in Sydney, where increased security was a major focus of official remarks in the aftermath of the London attacks. In 2014, a gunman claiming affiliation with ISIS held several hostages in a Sydney cafe for a harrowing 16-hour siege that left three dead.

“We're here to work together in a manner that protects the freedom and the values that we share together and we're committed to passing those freedoms onto the next generation intact,” Mattis told the assembled Australian representatives. “Relationships either get stronger or weaker — they don't stay the same, and we're here as a commitment that we are going to strengthen further a relationship that's in both our nation's best interest.”

U.K. Prime Minister Theresa May echoed Mattis’ remarks in the hours after the London attack, suggesting that her government would likely ramp up security measures in the aftermath of the brutal incident.

“It is time to say enough is enough,” she said. “We cannot and must not pretend that things can continue as they are.”

If anything, Mattis seems to have taken the World War II-era British mantra of “Keep Calm And Carry On” to heart. The same, however, probably can’t be said for his boss, President Donald Trump, whose response to the attack involved “stoking panic and fear, being indiscreet with details of the event and capitalizing on it to advocate for one of his more polarizing policies and to advance a personal feud,” as the Washington Post described his post-attack flurry of tweets.

We need to be smart, vigilant and tough. We need the courts to give us back our rights. We need the Travel Ban as an extra level of safety!

Do you notice we are not having a gun debate right now? That's because they used knives and a truck!

We must stop being politically correct and get down to the business of security for our people. If we don't get smart it will only get worse

At least 7 dead and 48 wounded in terror attack and Mayor of London says there is "no reason to be alarmed!"

Standing tall in the face of terror is a great message from Mattis, but time will tell if the U.S. and U.K. governments really are keeping fear in check.