Is The Mattis-Trump Honeymoon Over?

Relations may be souring between President-elect Donald Trump and the legendary Marine general he has tapped to be his secretary... 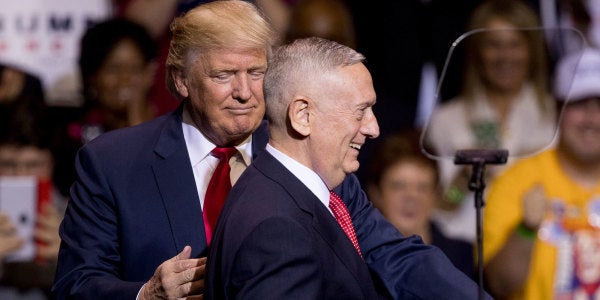 Relations may be souring between President-elect Donald Trump and the legendary Marine general he has tapped to be his secretary of defense, Marine Gen. James “Mad Dog” Mattis.

Trump heralded Mattis as a stellar leader from their initial meetings in late November, through when he announced him as secretary of defense at a rally in Fayetteville, North Carolina, on Dec. 6.

But according to a report from The Washington Post citing unnamed sources in the Trump transition team and the Mattis camp, in the weeks since Mattis was announced as Pentagon chief, there has been consistent sparring between the general and Trump’s inner circle.

Mattis apparently learned from the news media that Trump had tapped a close ally, Vincent Viola, an Army veteran and billionaire, for the position of Army secretary.

“Mattis was furious,” an anonymous source told the Post. “It made him suspicious of the transition team, and things devolved from there.”

Mattis reportedly wants influence into how those key Pentagon posts are staffed, and that has not necessarily been occurring. Mattis has since rejected all of the names the Trump transition team has offered for key positions like undersecretary of defense for intelligence. There is further tension over the post of undersecretary of defense for policy, which Trump ally Mira Ricardel is reportedly preferred for by those inside the Trump camp. Mattis is viewed as unlikely to accept her nomination.

“Let’s put it this way, he’s being very picky about the options presented to him,” the anonymous source told the Post.