While on a flight to Washington last year, Defense Secretary James Mattis was pondering how to make President Donald Trump’s... 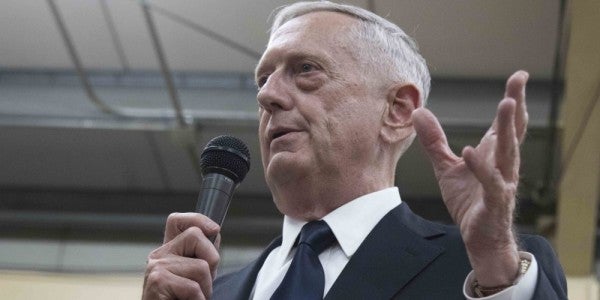 While on a flight to Washington last year, Defense Secretary James Mattis was pondering how to make President Donald Trump’s “America First” foreign policy fit with the need for alliances.

Inspiration came in an unexpected form: The flight attendant’s safety briefing about what to do in case the plane lost cabin pressure at altitude.

As anyone who has ever flown before knows, the passengers were instructed that when oxygen masks drop from the ceiling, they should put their own masks on first before helping others. Unbeknownst to the others on Mattis’ flight, a new metaphor to describe American foreign policy had just been born.

“What we’re going to do is restore America’s economic viability because no nation in history has maintained its military power that was not economically viable and did not keep itself in order,” Mattis said Friday during a speech in which he laid out the new national defense strategy.

The strategy focuses on threats from nation-states such as Russia and China, rather than the types of terrorist groups that the U.S. military has fought since 2001, Mattis said in his speech at Johns Hopkins School of Advanced and International Studies.

While alliances play a key role in the strategy, “America First” calls for U.S. allies to commit more resources to common defense, he said. That’s why Mattis invoked the oxygen mask symbolism when he first met with ministers from the 29 NATO members in Brussels.

“I said: ‘I am speaking from the heart I know many of you here. I have sat behind Secretary Rumsfeld when he came here and said you are going to have to pay more; you can’t expect the Americans to keep doing this. I heard Secretary Gates put his prepared remarks down and tell you he needs to lay this on the line: that the American people do not want to continue to carry a disproportionate share.

“You have heard it from President Obama’s administration. I’ve been here and I heard it said then. Now it’s manifested politically in America. So here’s the bottom line: Please do not ask me to go back and tell American parents that they need to care more about the safety and security and the freedom of your children than you’re willing to care for, than you’re willing to sacrifice for.

“We’re all going to have to put our shoulders to the wagon and move it up the hill.”

So far, U.S. allies have taken the message more warmly than Mattis expected, but they are also democracies grappling with their own internal politics, he said.

The importance of alliances is more than a talking point for Mattis, who noted that whenever he went into combat, he always fought alongside foreign troops. The coalition against the Islamic State currently includes more than 70 countries, while about 40 countries are part of the mission in Afghanistan.

Going forward, the Defense Department will be more willing to be persuaded by allied nations’ arguments, he said.

“Not all good ideas come from the country with the most aircraft carriers,” Mattis said.