If You Thought Chesty The Bulldog Was The Original Corps Mascot, You’d Be Wrong

Just about anyone who’s met a Marine knows the story of World War I’s Battle of Belleau Wood — it’s... 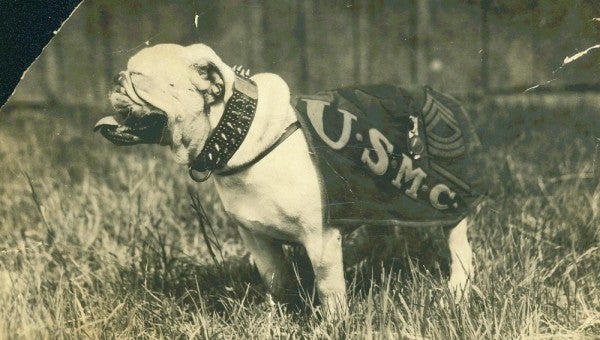 Just about anyone who’s met a Marine knows the story of World War I’s Battle of Belleau Wood — it’s usually the second thing a jarhead will tell you. (The first is that they’re in the Marine Corps.)

It was after the Battle of Belleau Wood that the Marines assumed the moniker “devil dogs,” purportedly from the battered Germans who dubbed their salty, indefatigable conquerors teufelhunden: hell hounds. (This has since been debunked by Marine Corps historians.) After the war, the nickname began appearing on recruiting posters, and in Marine Corps motto tats alongside an image of a helmet-clad snarling English bulldog.

And it’s all thanks to one Marine: Sgt. Maj. Jiggs, the Corps’ first mascot.

Originally named King Bulwark, he was adopted by the commandant of the Marine Corps and two-time recipient of the Medal of Honor, Brig. Gen. Smedley D. Butler, in 1921. At the time, calling a dog “king” didn’t jive with the Corps, even if it was a kickass name, so Butler renamed him Jiggs. With his new position came new threads, including a tailor-made set of dress blues, a range of covers and uniform items, and rank insignia.

Who's a good devil dog?Photo via the Marine Corps History Division Archives

Maj. Gen. Smedley D. Butler and Jiggs, the bulldog mascot of the U.S. Marines, photographed during the filming of the Marine movie, “Tell it to the Marines,” on the West Coast in 1926.Photo via the Marine Corps History Division Archives

On Oct. 14, 1922, during a formal ceremony, Butler signed the enlistment papers for Jiggs. The contract length: life. (In case you ever thought the fine print on your contract was rough.) Like all Marines, Jiggs had duties — sit, stay, lie down — and the ability to pick up rank, which he did at a cyclic rate. By 1924, the enterprising bulldog had rocketed up the ladder from private to sergeant major.

Sgt. Maj. Jiggs in the PT uniform of the day.Photo via the Marine Corps History Division Archives

Unfortunately, due to the short lifespan of English bulldogs, Jiggs passed away on Jan. 9, 1927, and was buried with full military honors in a satin-lined casket at Quantico. But Jiggs’ legacy endured, with the breed becoming the official mascot of the Corps. Before Jiggs passed away, the mantle of Marine Corps mascot passed to Jiggs II.

A change of command ceremony for Sgt. Maj. Jiggs and Jiggs II.Photo via the Marine Corps History Division Archives

Jiggs II had a bit of a discipline problem: “Jiggs chased people, he bit people. He showed a total lack of respect for authority. The new Jiggs would have likely made an outstanding combat Marine, but barracks life did not suit him. After one of his many rampages, he died of heat exhaustion on 1928,” according to Heritage Press.

In the years to come, more stout English bulldogs — named after famous Marines like Gen. Chesty Puller — answered the call; it’s a tradition that continues today: