After 75 Years, The Seabees Show No Signs Of Slowing Down

Thirty-seven years old. By the time most American men reached that age back in 1941, they had already started families,... 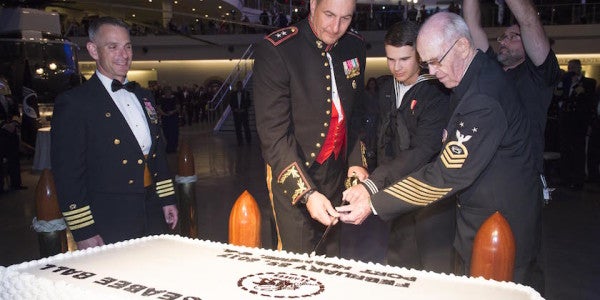 By the time most American men reached that age back in 1941, they had already started families, bought their own homes, and had settled into their careers. In fact, with life expectancy being a mere 61 years old back then, they were already past the point of mid-life.

But when the Japanese attacked Pearl Harbor on Dec. 7 of that year and the United States was thrust into war, the call went out for skilled tradesmen to join the Navy, so as to become part of the sea service’s first construction battalions. These battalions would be used to replace the Navy’s then-endangered overseas civilian workforce with a new breed of warrior-builder, one who would not only build the bridges and pave the roads in support of America’s combat forces, but who would also be able to fight back when coming under fire.

These early volunteers during the first year of World War II would come to be known as Navy Seabees (from “construction battalion”), and thousands of them put their civilian lives — to include their families and their careers — on hold, so as to answer the call to duty.

And they did it at the average age of 37.

Susan Hayward perched on top her throne — a Symbolic Seabee dozer — is crowned the first Seabee Queen by the enlisted me of CBMU 515, November 1943. she was welcomed to Camp Rousseau by Capt. Needham and crowned by F1c Clarence Woofford and MM2c William Murray. Hayward starred in the 1943 film “The Fighting Seabees.”

On March 5, the Seabees turn 75. And though that initial, all-volunteer, and older-aged construction force was soon to be replaced by a new group of younger and unskilled recruits by way of the draft in 1942, the rugged spirit of those first men to earn the title of “Seabee” (along with their straightforward motto of “Can Do”) would pass down to the young men and women who would follow in their footsteps over the next 75 years. They would forge a rich history steeped in victory and sacrifice while going on to participate in every major U.S. military engagement and humanitarian action since the inception of the U.S. Naval Construction Forces.

During World War II, Seabees in the Pacific theater would build 441 piers, 111 airstrips, hundreds of square blocks of warehouses, and numerous hospitals that would serve 70,000 patients. In the European theater, Seabees attached to naval demolition units (the forerunners of today’s Navy SEALs) were some of the first American service members to set foot on the beaches of Normandy, where they labored to destroy concrete and steel barriers meant to impede the impending allied invasion.

In 1950, after a brief respite from war, Seabees would find themselves under heavy fire at Inchon, South Korea, where they successfully labored to overcome 30-foot tides and a swift current while installing essential pontoon causeways, in what has come to be known as one of the most brilliant amphibious assaults in history.

And during the early years of the 1960s, a number of young men voluntarily enlisted to become part of the now-legendary building and fighting force that had been established just one generation earlier. These were men like Construction Mechanic 3rd Class Marvin Glenn Shields, who joined the Navy at 22 and later went on to courageously fight and die at the battle of Dong Xoai. For his bravery, Shields was posthumously awarded the Medal of Honor.

Those examples are just a drop in the bucket of Seabee history. This is a military construction force that, time and again, has successfully risen to the occasion in the face of adversity.

That quality is what motivated those early, first-generation Seabees of 75 years ago to serve. And Capt. Jeffrey Kilian, current commodore of 30th Naval Construction Regiment — the man responsible for all deployed Seabee operations in the Pacific — says it still motivates the young men and women who answer the call to serve today.

“I think everyone who serves in the U.S. Navy, and in the Seabees in particular, should be proud of the Seabee history,” Kilian told me. “We pull a certain group of folks out of the American population that are truly motivated to serve, and I think these folks understand that from a very young age.”

U.S. Navy Seabees with Naval Mobile Construction Battalion 3 attach an arch to a K-Span unit at Camp Wilson aboard Marine Corps Air Ground Combat Center, Twentynine Palms, Calif., Feb. 2, 2017. NMCB 3 is in Camp Wilson for three weeks working on the construction of displacement walls and K-Span units for their upcoming deployment in April.

“With us tonight are the echoes of great battles won, and more fights to come,” said Marine Corps Maj. Gen. Daniel O’Donohue, commanding general of the 1st Marine Division, and the ball’s guest of honor, during his keynote speech. “Seldom in history has a body of men and women given so much selfless service for freedom’s cause than the Seabees.”

O’Donohue also spoke of the strong history of fighting side-by-side in battle that is shared by Marines and Seabees, and of the sort of tug of war between the Navy and Marine Corps that the first Seabees had been caught up in concerning which branch of service the Seabees would would belong to, until the Navy finally won out in what O’Donohue described as “one of the few fights Marines have lost.”

The general then addressed all active and reserve component Seabees in the room, telling them that “the responsibility for our freedom has been passed from our veterans to your strong hands.”

Symbolic of this, the evening’s formal ceremony concluded with a longstanding tradition that involves the youngest and oldest individual Seabees in attendance.

Born in 1926, retired Master Chief Equipmentman and Purple Heart recipient Jim Daniels joined the Navy at 16 and went on to serve in World War II, the Korean war, and Vietnam before finally hanging up his uniform in the late ’60s. At 18 years old, Constructionman Recruit Colin Ryniec joined the Navy just last November, and is looking forward to graduating from his training to become a Construction Mechanic.

Together, these two men, distanced by age but united by decades of shared Seabee history, joined O’Donohue in gripping a ceremonial cutlass and slicing into an extra-large Seabee birthday cake, to the roaring applause of the crowd.

“What started as a loosely organized (group) in World War II quickly became a very competent presence within the Navy, and we’ve progressed tremendously in the 75 years since,” said Kilian, while reflecting on how far the Seabees have come since the days of those older, first-wave tradesmen pioneers. “Our equipment, our training is top notch, and I would put our folks against anybody.”

And so, happy 75th birthday to all Seabees near and far, young and old, and here’s to another 75 strong years.