Marine Corps Chow Halls Are Getting A Healthy Food Makeover

The Marine Corps Military Occupational Specialty schools, where the careers of of young Marines are minted, are facing an extreme... 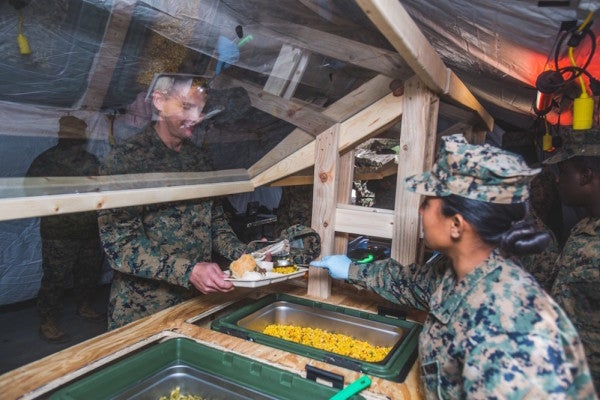 The Marine Corps Military Occupational Specialty schools, where the careers of of young Marines are minted, are facing an extreme makeover of the dietary variety.

The Corps is now planning to remove the snack line from chow halls at the School of Infantry on both the East and West Coast schools are as its resident dietitian moves to create a healthier eating experience for new recruits.

“It’s not that we’re taking all of the bad stuff out of the chow hall; it’s about encouraging Marines to make good choices and try to limit the bad stuff,” Col. Michael Watkins, director of the newly created force fitness division, told Marine Corps Times.

The snack lines, Watkins said, were originally put in place to accommodate large volumes of recruits who needed to eat on the run. Now Marines will be offered two chow hall lines with healthier food options, which likely means the disappearance of everyone’s favorite snack line foods: hot dogs, burgers, and ice cream.

“If I have two good lines, now we can get everybody through in a reasonable amount of time and give them healthy food – and, by the way, teach them a healthy habit,” Watkins said.

Whether or not those habits will stick is another question entirely. After graduating from boot camp and MOS school, Marines have no food regulations while on active duty. It seems unlikely that a few months sans snack lines will really eliminate the overwhelming desire to consume junk food that has been at least 18 years in the making for most recruits.

Correction: An earlier version of this article reported that the Marine Corps was removing snack lines from all MOS schools. It also incorrectly stated that recruit training depots had snack lines (Updated 3/30/2017 at 11:47 a.m. EST).