The times, they are a changin’. Soon Marines will say goodbye to the days of “recruit laminating” their meal cards... 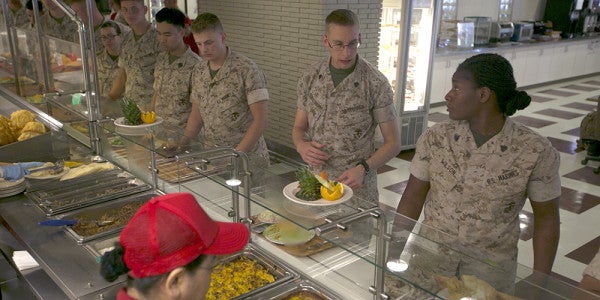 The times, they are a changin’. Soon Marines will say goodbye to the days of “recruit laminating” their meal cards — i.e., taping both sides with clear tape and then trimming the edges. Now, all you need to do is swipe your CAC card, and voila: Delicious powdered eggs and suspicious microwaved bacon are served.

The Marine Corps has announced that it’s implementing new point of sale (POS) software at chow halls across the fleet. When the change goes into effect, all you’ll need to do to collect on your meal plan is present your CAC card and get the back barcode scanned.

So far, only the hungry at Marine Corps Base Hawaii have used the new system, part of a February test-run for the new policy. The first major POS installation will be at Okinawa, Japan, beginning mid-June, Kenneth Barnes, a project lead for the point of sale implementation, told Task & Purpose.

After that, the program will roll out regionally — to San Diego, California, then to Camp Lejeune, North Carolina (and all the smaller installations nearby and in between), before wrapping up in Norfolk, Virginia, by the end of October.

Meal cards won’t officially go away until the point of sale software installation is complete, Barnes explained. The exact timeline for when those pesky pieces of paper hit the waste bin will be up to Marine Corps Reserve and Manpower Affairs.

It’s a minor thing to be sure, but anyone who’s ever gotten an ass-chewing for misplacing a piece of paper they never use — come on guys, Dominos, they deliver on base — this is sure to make life a bit easier when you do decide to hit up the chow hall.