Meet The VA’s Secret Weapon In New York: The Veterans Of ‘Post 23’

I visited New York City’s VA Medical Center for the first time three years ago. I’d been a veteran for... 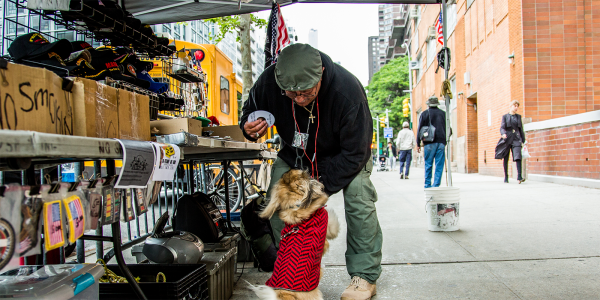 I visited New York City’s VA Medical Center for the first time three years ago. I’d been a veteran for all of five months, and had only lived in the city for a week or so before I received an email from the VA instructing me to check in with my new primary care provider and to see someone for my freshly diagnosed PTSD.

The underwhelming center, on East 23rd Street in a section of Manhattan’s old Kips Bay neighborhood, shares the drab, forlorn look of the private hospitals and housing projects that surround it, distinguished only by a VA logo slapped on the side of the building. Two signs greet you at the front door. One says “AMBULANCE ENTRANCE.” The other: “NO FIREARMS OR WEAPONS ALLOWED ON THIS PROPERTY”.

Having spent the previous four years in North Carolina and Afghanistan, I faced a new and serious problem with the latter sign. In my pocket was the small folding knife I’d kept from my first deployment as a good luck token. I was already nervous, my brain full of VA horror stories and anxieties that come with walking into a hospital to spill your guts to a psychologist for the first time. Now I had to get rid of this blade, my Marine version of a fidget spinner, or miss my appointment.

I lit a cigarette to calm my nerves and noticed a large dark canopy on the sidewalk next to the hospital’s long entrance ramp. Underneath the tent were three plastic fold-out tables covered in military memorabilia. A handmade wooden sign hanging over the tent read “LZ DINKY DAU” — pidgin Vietnamese for “crazy”. Covering the tables were pins, hats, patches, shirts, jackets — an entire boutique of ways to represent one’s military experience.

To the side, a handful of Vietnam veterans were sitting on worn office chairs and stacks of milk crates in a loose circle. One was in a wheelchair; two leaned on canes. The loudest of them moved between the others, shaking hands and slapping backs, all the while keeping up a monologue that toggled between war stories, rapid-fire Spanish, song snippets, and military slang: “The LZ is hot today, eh boys?… If it ain’t raining we ain’t training!… It’s a beautiful day to die!”

I approached the man to inquire about my situation. “I’ve got an appointment here but I’ve got this knife on me that I got from Afghanistan, do you think—”

Before I could finish the sentence, the man held his hand out. I gave him the knife and it disappeared into his pocket.

“Don’t worry about it brother, I got you,” the man said with a hint of a Hispanic accent. “You an Afghanistan vet, then?” I nodded.

The man spun away from me, and for a split second I was afraid I’d just lost my knife to a salty ex-paratrooper. He walked to one of the tables, pulled a black baseball cap with “Afghanistan Veteran” emblazoned on the front from one of his boxes, turned back around, and handed it to me.

“How much?” I asked, reaching for my wallet. The man shook his head, thrusting the hat into my hand. I took it and he clasped both his hands on mine.

This was my introduction to “Post 23” and its commanding officer, Johnny Santiago.

Johnny Santiago was 18 years old when he shipped to Vietnam in 1971. Trained as a mechanic, he was pressed into service as an infantryman upon arrival to Saigon, serving in combat with the 101st Airborne Division and 75th Ranger Regiment for two years.

“I wanted to go back to Vietnam, but I was barred from reenlisting after six Article 15s,” Santiago explained over a cigar, referring to the Army’s version of non-judicial punishment. Post-deployment struggles with what would eventually be diagnosed as PTSD left Santiago with a handful of drunk and disorderly charges, and he was forced to leave the Army in 1977, he told me. He spent thirteen years on the street struggling with drug and alcohol addiction.

In the 1990s Johnny began therapy at the VA for his PTSD, attending meetings for alcohol and drug dependency in the hospital, and moved into an apartment. For a decade he ran a small stand selling religious shirts and pins in front of Yankee Stadium in the Bronx.

In 1999, Santiago’s therapist suggested he move his stand to the VA center and sell memorabilia to the veterans there, thinking his personality and history would make him a perfect fit.

Speaking with a homeless Iraq War veteran whose struggle with substance abuse keeps him from holding down a job and a home; encouraging an older veteran to be patient with a new doctor. Santiago and his friends at Post 23 — their tongue-in-cheek name for this daily tent revival — walk veterans through medical, family, and even romantic troubles with the confidence of those who’ve been through it all.

After a few minutes with these men, the scene feels more like a smoke pit at some long forgotten patrol base in the jungles of Vietnam than a kitschy hat-and-pin stand in the Big Apple. Watch a group of men on the far side of 70 sitting around Johnny’s tent, swapping stories and sharing their hot takes of the day’s news, and you can see the 18-year-olds they were once.

There’s Haywood, who served as a quartermaster in the Army during Vietnam. Haywood spent a few years selling international flag pins outside LaGuardia International Airport, but he switched to selling military memorabilia at the VA after he saw how useful it was for helping veterans heal during group therapy sessions.

“The guys in the groups said that once they started buying pins, everybody started talking, making that connection,” he said. “They welcomed me, embraced me. So ever since then, I been here.”

Maya, a wry Puerto Rican with a ballcap emblazoned with the colors of his homeland, is soft-spoken but bustles with energy one rarely finds in a man in his 70s. He spent a year in Vietnam as a tunnel rat, shoving himself head first into tunnels with a flashlight and a pistol to flush out the enemy in the dark.

After his mother passed away a few years ago, Maya needed something to keep him from sinking into depression. “Now I pass my time here. I like it, the routine, helping set up in the morning,” he told me. “It’s nice to be with these guys. It relaxes your mind.”

Jimmy, a wheelchair-bound machine-gunner who served in the 9th Infantry Division in Vietnam, is another regular. As I interviewed Santiago, Jimmy slammed his wheelchair into Angel, an Army vet who served in Korea from 1962 to 1967. Their wheelchairs clanging, both barely contained grins as they berated each other. “Don’t fucking run into me!” “Turn your hearing aid up so you’ll hear me coming next time!”

When asked how they feel about younger veterans from more recent conflicts, the men of Post 23 offered advice and empathy. “They’ve got a lot to catch up on,” said Maya, “so us older veterans tell them what they have to do when they get out, what they’re going to go through.

“When they come here for the the first time, fresh from Afghanistan, we tell them where to go, where the appointments are. When they first come here they’ve got to talk to Johnny first, you know?”

I asked Johnny why he gave me that hat when I first met him, and why he makes a point to talk to every young veteran he doesn’t recognize as they walk up to the building for the first time. His eyes clouded over.

“When we came home, nobody wanted us. We were getting shit on,” he said. “So now we make it our business to make the new veterans know that they’re welcomed home, that we love them.”

Three years ago, I walked out of the Manhattan VA hospital for the first time. It would be the first of many visits as I began treatment for PTSD and the “grunt cocktail” of knees, back, and feet injuries. I walked down the long walkway to Johnny’s tent, and he handed me my knife. I picked up a small Marine Corps pin with a bulldog on it, gave him $5 for the pin, and we shook hands.

“They take care of you in there?” Johnny asked me, and I nodded.

“Good to hear, brother. You let us know if you need anything.”

I told him I would, and he turned back to yelling expletive-laden affection at Maya and Angel.

To this day I arrive early for my appointments on 23rd Street, following the sound of salsa and ’60s pop tunes to the dark canopy on the sidewalk next to the hospital entrance. Sometimes the only thing that gets me into that building is a few minutes sitting on an upside-down milk crate or fold-out metal chair, enjoying a cigarette and coffee, while the men of Post 23 welcome us all home.