Al Shabab jihadists launched a vicious attack on a military base in Somalia on June 8, killing nearly 70 and... 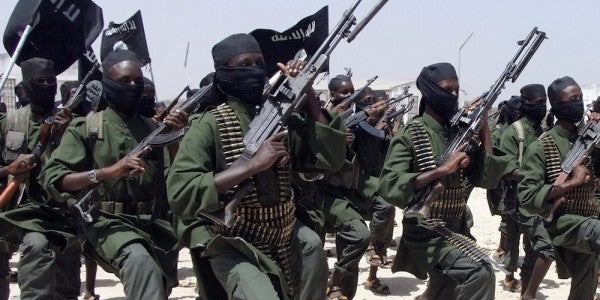 Al Shabab jihadists launched a vicious attack on a military base in Somalia on June 8, killing nearly 70 and reportedly beheading civilians in what Somali army officials described to the Associated Press as “the region’s deadliest attack in years.”

A Somali army officer told Reuters that the al Qaeda-affiliated extremists killed 20 soldiers, brutally executed civilians, and torched Somali military vehicles during the rampage, on the Af-Urur base in the country’s semi-autonomous Puntland. Al Shabab claimed to have slaughtered 62 soldiers and “seized a large amount of weapons and ammunition and more than a dozen military vehicles,” according to the Associated Press.

“The situation is grim over there,” senior Somali military official Ahmed Mohamed told the AP. “This attack was an unexpected one.”

An AFRICOM spokesman told Task & Purpose on June 7 that U.S. forces are not currently involved in any operations in Mogadishu and that that the command oversees “about 200 U.S. forces rotating in and out” of the country, with nearly a half of them U.S. special forces. SOCOM referred Task & Purpose back to AFRICOM.

The Pentagon's expanding footprint in the region has come with costs. In early May, a Navy SEAL was killed and two U.S. service members wounded during an al Shabab ambush while training Somali forces 40 miles west of Mogadishu. The SEAL, identified as Senior Chief Special Warfare Operator Kyle Milliken, was the first American killed in the country since the Battle of Mogadishu.

It is unclear if any U.S. troops were involved in the June 8 attack on Af-Urur, although it’s possible they were in the area. According to an October 2016 report in the New York Times, U.S. forces “ with Somali forces often interrogate prisoners at temporary screening facilities, including one in Puntland, a state in northern Somalia, before the detainees are transferred to more permanent Somali-run prisons.”

The Pentagon and 101st Airborne PAO at Fort Campbell did not immediately respond to requests for comment from Task & Purpose.

The United States has ramped up its presence in the war-torn country in recent months. In January, military personnel engaged in a counterterrorism operation alongside local Somali and African Union Mission forces “observed al-Shabaab fighters threatening their safety and security” and “conducted a self-defense strike to neutralize the threat,’ per U.S. Africa Command.

In March, President Donald Trump loosened the rules of engagement to give AFRICOM chief Gen. Thomas Waldhauser greater autonomy in conducting airstrikes and raids by troops on the ground in an effort to beat back the tide of al Shabab jihadists.

In April, the Army deployed soldiers with the 101st Airborne Division out of Fort Campbell to Mogadishu in the now-standard “training and advisory” role to help Somali and African Union forces in their protracted battle with al Shabab militants. The deployment marked the first deployment of conventional U.S. troops to the country since the infamous 1993 Battle of Mogadishu immortalized in “Black Hawk Down.”

SOCOM has also beefed up its presence in the country despite the Pentagon’s expanding focus on eradicating ISIS in Afghanistan, Iraq, and Syria. A 2016 strategic planning guidance report that surfaced in May indicated that SOCOM had more special operators in Africa than anywhere else except the Middle East.

“At any given time, you will find SOCAFRICA conducting approximately 96 activities in 20 countries,” Army Gen. Donald Bolduc, head of special operations in Africa, wrote in the report. “Africa’s challenges could create a threat that surpasses the threat that the United States currently faces from conflict in Afghanistan, Iraq, and Syria.”