Navy SEAL Killed In Action In Somalia, 2 Others Wounded

A Navy SEAL was killed and two other U.S. service members were wounded in Somalia on May 5 when they... 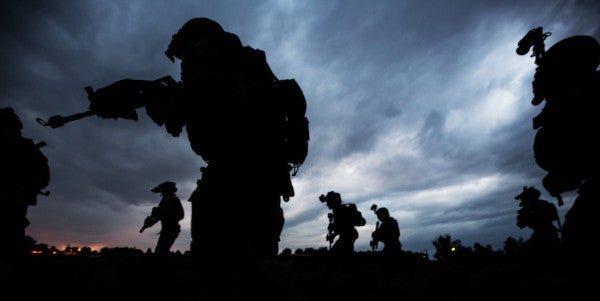 A Navy SEAL was killed and two other U.S. service members were wounded in Somalia on May 5 when they came under attack by members of al Shabab, a Somali-based militant group aligned with al Qaeda, The New York Times reports.

A U.S. defense official confirmed that the incident occurred while the commandos were on a mission advising Somali National Army forces 40 miles west of Mogadishu, and that the American service member was killed by small arms fire.

The name of the fallen SEAL is being withheld until the next of kin is notified.

This appears to be the first time a U.S. service member has been killed in action in Somalia since the 1993 Battle of Mogadishu, which resulted in the deaths of 18 Americans.

Related: Dozens of U.S. troops Head To Mogadishu For The First Time Since ‘Black Hawk Down’ >>

A small but growing contingent of U.S. troops has been operating quietly in Somalia since December 2013, according to the Washington Post. Their primary mission is to help advise and assist counterterrorism forces; however, U.S. Special Operations troops, including members of SEAL Team 6, have also carried out raids against al Shabab in the country. Al Shabab is also regularly targeted by American airstrikes.

The Trump administration has been planning to step up military operations in Somalia as terrorist groups — namely, al Shabab and ISIS — continue to expand their footprint in the country, according to Al Jazeera. The commandos killed and wounded in Friday’s attack were not part of that stepped-up effort, CNN reports.

Reports of U.S. military casualties from recent months provide a glimpse at the scope of the War on Terror as it’s being fought now. Since November 2016, American troops have been killed fighting in Iraq, Syria, Afghanistan, Yemen, and now Somalia.

“We continue to support our Somali and regional partners to systematically dismantle this Al Qaeda affiliate, and help them to achieve stability and security throughout the region as part of the global counterterrorism effort,” Africa Command said in the statement.