1 US Operator Killed, Another 4 Troops Wounded In Somalia

One U.S. special operator was killed and another four service members were wounded on Friday during a mission in Somalia... 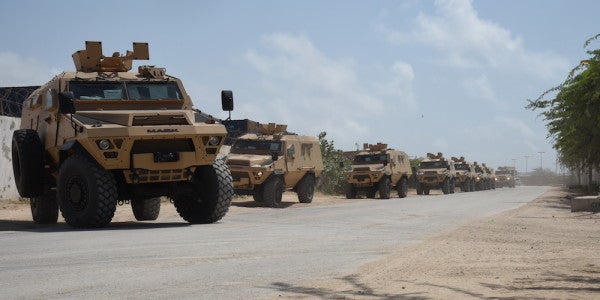 One U.S. special operator was killed and another four service members were wounded on Friday during a mission in Somalia against al-Shabaab, a terrorist group affiliated with Al Qaeda, defense officials have announced.

The name of the fallen service member is being withheld pending next of kin notification, according to AFRICOM.

The U.S. troops’ role was to provide advice, assistance and aerial surveillance to the Somali and Kenyan forces as they cleared al-Shabaab militants from villages and established a combat outpost.

Waldhauser was briefing the press on the findings of an investigation into the Niger incident. He said that U.S. forces in Africa had come under fire about 10 times during the past year. Most of those “troops in contact” incidents were in Somalia because “we have active operations ongoing there,” he said.

AFRICOM has conducted several airstrikes in Somalia recently, including a June 2 strike that killed 27 al-Shabaab militants southwest of Bosasso.

“This was the deadliest strike to date this year,” AFRICOM spokesman Air Force Maj. Karl Wiest told Task & Purpose. “In coordination with the Federal Government of Somalia we will continue to degrade the functional networks of ISIS in Somalia and al-Shabaab as these groups pose a direct threat to Americans, our allies, and interests in the region.