A group of al Shabab fighters in war-torn Somalia were targeted by a U.S. self-defense strike on July 4 that... 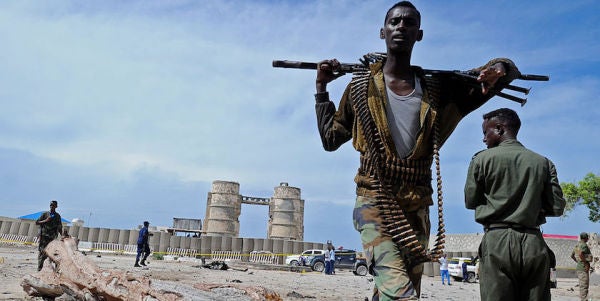 A group of al Shabab fighters in war-torn Somalia were targeted by a U.S. self-defense strike on July 4 that has been deemed “successful” by the Department of Defense, the latest salvo in an escalating counterterrorism campaign that has been largely overshadowed by U.S. military operations elsewhere.

U.S. Africa Command said in a prepared statement that the strike occurred 300 miles southwest of Mogadishu, but did not provide an estimate of how many militants were killed and didn’t specify what prompted the attack — which Stars and Stripes notes is the second strike carried out by U.S. forces in Somalia in less than a week.

“We will continue to assess the results of the operation, and will provide additional information as appropriate,” the statement reads. “Specific details about the units involved and assets used will not be released in order to ensure operational security.”

AFRICOM is tasked with supporting a 22,000-strong African Union mission in Somalia, composed of troops from Burundi, Djibouti, Ethiopia, Kenya, and Uganda, while also helping train the Somali National Army for the fight against al-Shabab, an al-Qaeda-linked jihadi group that nearly overran Mogadishu several years ago.

The U.S. military has enjoyed greater autonomy in the Horn of Africa under President Donald Trump. In March, the president granted Marine Gen. Thomas Waldhauser, the head of AFRICOM, broader authority to execute strikes against al-Shabab, a target for U.S. troops for more than a decade.

“It’s very important and very helpful for us to have a little more flexibility, a little bit more timeliness, in terms of decision-making process,” Waldhauser said in a news conference in March. “It allows us to prosecute targets in a more rapid fashion.”

Under the previous rules of engagement, U.S. airstrikes could only be used when Somali partner forces were at risk of being overrun, or when those forces requested air support in an engagement. U.S. troops could transport Somali forces to and from raids, but couldn’t participate in them (although in 2016, numerous raids on al-Shabab targets involved American forces).

Now, U.S. special operators can openly accompany regional allies on offensive strikes when commanders on the ground deem it necessary.

As further evidence that the U.S. mission in the Horn of Africa is intensifying, the number of American special operators in the region has spiked dramatically over the past decade. In 2006, only 1% of Special Operations forces deployed overseas were in Africa. By 2016, special operators in Africa accounted for more than 17% of the total deployed force, the Miami Herald reports. Waldhauser requested and received 40 additional troops in April, according to the Washington Post. That month, a contingent of 101st Airborne soldiers also deployed to Somalia in a “training and advisory” role.

More autonomy for AFRICOM has resulted in more direct fighting between U.S. troops and al Shabab. On May 4, Senior Chief Petty Officer Kyle Milliken, a Navy SEAL, was killed and two other Americans were wounded in a raid on an al-Shabab compound in Somalia. Milliken was the first American service member to die in combat in Somalia since the infamous 1993 Battle of Mogadishu.

The July 4 airstrike appears to be the third carried out under the expanded authorities granted by Trump. The first occurred on June 11, when AFRICOM killed eight militants in an attack that targeted a command and logistics node in southern Somalia; according to Stars and Stripes, the second strike took place on July 2.

Al-Shabab began as a local movement in 2006, as the radical youth wing of Somalia’s now-defunct Islamic Courts, which once controlled Mogadishu before Ethiopian forces drove them out. The group has since evolved into an internationally recognized terrorist organization with global aspirations, staging numerous attacks abroad, including on Nairobi’s Westgate shopping center in 2013. The group also seems to be growing in strength. Al-Shabab militants killed nearly 70 people, including civilians, on June 8, during a vicious attack on a military base in Somalia.

“Al-Shabaab has pledged allegiance to al-Qaeda and is dedicated to providing safe haven for terrorist attacks throughout the world,” AFRICOM said in its statement following the July 4 attack. “Al-Shabaab has publicly committed to planning and conducting attacks against the US and our allies.”