The United States is primed for an increase in military operations in the Horn of Africa after President Donald J.... 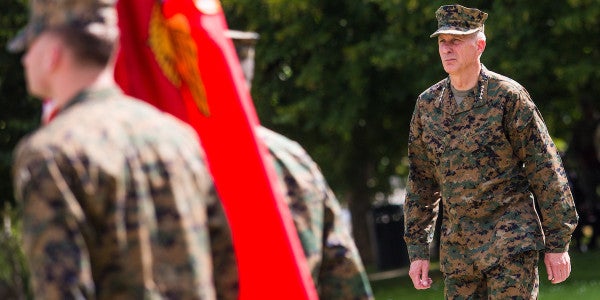 The United States is primed for an increase in military operations in the Horn of Africa after President Donald J. Trump relaxed standards governing the rules of engagement last week. This move grants the military more authority in Somalia in the fight against al Shabab, an al Qaeda-linked terror organization based in the region.

The decision, backed by Defense Secretary Jim Mattis, is not without merit. A recent piece inthe National Interest called Somalia, “the anarchic Horn of Africa nation” that “has been and remains in the crosshairs of the U.S. counterterrorism community.”

The new rules, according to the National Interest, give the U.S. military forces in Africa broader autonomy in conducting airstrikes. Under the previous rules, airstrikes could only be used when Somali military forces were at risk of being overrun by al Shabab militants, or when Somali military forces themselves requested air support in the midst of a firefight. Also under the previous rules, U.S. forces could only provide transport to Somali forces on raids, picking them up and dropping them off. Now, U.S. special operators may accompany their Somali allies on the operations.

In an era of high-profile Marine generals like Marine Commandant Gen. Robert Neller, Joint Chiefs Chairman Gen. Joseph Dunford, and retired generals Mattis running the Defense Department and John Kelly running Homeland Security, Waldhauser is flying way under the radar. But he’s a low-key bold and combat-tested leader. A former Marine infantry officer, Waldhauser has a diverse and impressive resume that has carried him from chief of staff of U.S. Special Operations Command to commander of U.S. Marine Corps Forces Central Command and as the senior military assistant to former Secretary of Defense Chuck Hagel.

As a colonel, he commanded the 15th Marine Expeditionary Unit when it deployed to lead the invasion of Afghanistan in November 2001. Among his awards and accolades include a Legion of Merit with a valor device, a combat award higher than a bronze star and lower only than a Silver Star, Navy Cross, or Medal of Honor.

Waldhauser played a big role inone of the most contentious moments in the tenure of an embattled former Marine commandant, retired Gen. James Amos. After video surfaced in 2012 of Marines urinating on the corpses of Taliban fighters in Afghanistan, Amos appointed Waldhauser, then a three-star general and commander of both U.S. Marine Corps Forces Central Command and I Marine Expeditionary Force, to investigate the incident.

Marine Corps Lt. Gen. Thomas Waldhauser testifies before the U.S. Senate Committee on Armed Services at a confirmation hearing for his appointment to the grade of general and to be commander of U.S. Africa Command, June 21,2016.DoD photo

Waldhauser, a combat-decorated former grunt, thought a non-judicial punishment was sufficient for the perpetrators, which would likely involve a modest fine and a reduction in rank. Amos wanted them “crushed,” and reportedly told Waldhauser as much, who reported Amos to the Pentagon’s inspector general for undue command influence. Amos stripped Waldhauser of his authority to investigate the case, the drama went public, and Amos’ reputation among ground force Marines never recovered.

Now, a four-star general and the only Marine unified combatant commander, Waldhauser finds himself in charge of an important piece in the next stage of the Global War on Terrorism, and with more autonomy than any U.S. AFRICOM commander has ever had in this era, he has enough rope to hang himself. The Horn of Africa has long been a bit of a trap for U.S. military operations, and special operators have been no exception.

In 1993, U.S. special operators with Delta force and U.S. Army Rangers stumbled in a high-profile mission in the Somali capital of Mogadishu to arrest the lieutenants of a top Somali warlord. A U.S. helicopter was shot down by a rocket-propelled grenade, sparking a messy rescue operation and violent battle that took the lives of 18 U.S. servicemen. That battle was immortalized in the 1999 book and 2001 movie “Black Hawk Down.”

More recently,in October 2013, members of the Navy’s elite SEAL Team Six conducted an operation to capture a top al Shabab target in a southern Somali village. As the commandos approached the town from the beach, they were foiled by a lone al Shabab militant, who pretended not to see the American forces while he smoked a cigarette outside, and then came back out firing with an AK-47. No U.S. military forces were killed in that operation, however, in their retreat, U.S. forces left behind some sensitive gear,including a GPS device.

These stories offer caution for how risky military operations in the Horn of Africa can be, but it also underscores how important the region is for global and regional stability. As the Long War Journal notes, “The Pentagon’s desire to actively target Shabaab reflects the growing concern that al Qaeda’s branch in East Africa is gaining strength.”

And al Shabab’s recent track record reflects not only efficacy, but sophistication. This is the terror group behindthe 2013 attack on the Westgate Mall in Nairobi, Kenya, which left more than 60 people dead. Some of the perpetrators of that attack are believed to have successfully escaped.

Even more recently, in 2016, al Shabab is believed to have detonated a bomb on a flight departing Mogadishu that was hidden inside of a laptop. That “sophisticated” device successfully made it through the airport’s security infrastructure. That incident averted more serious catastrophe because the bomb exploded before the plane could reach its cruising altitude. The terrorist was killed and a hole was blown in the side of the plan, and two people were injured, but the aircraft was able to safely turn around and land.

While this shift in the rules of engagement certainly stands to give more teeth to the U.S. military operations in Somalia against al Shabaab, it also carries significant risks.

Asthe New York Times points out, the old rules of engagement in Somalia were designed to protect the lives of innocent civilians who are far too often the silent casualties of conflict in counterinsurgency and counterterrorism operations. Trump’s directive “sets the stage for an intensified pace of combat , while increasing the risk that American forces could kill civilians.”

The old rules, put in place by former president Barack Obama in 2013, were not specific to Somalia, but rather part of a set of guidelines for conducting military operations outside of designated war zones like Iraq or Afghanistan. With this new guideline, Trump has effectively (and technically) designated Somalia a war zone, an “area of active hostilities,” a new area primed for an increase in U.S. military operations, but one far less visible to the average American. Should things go poorly, innocent civilians could be killed, American forces could be killed, and a fragile situation could devolve in one of the world’s worst failed states.

In an interviewwith the Associated Press in February, Waldhauser called Somalia, which hasn’t had a functioning government for 25 years, his region’s “most perplexing challenge,” and called for “trying to look at Somalia from a fresh perspective in the way ahead.”

It remains to be seen if Waldhauser’s newfound ability to strike against terrorist cells will move the ball forward toward stability.