Secretary of Defense James Mattis stated on Thursday that the Pentagon is open to sending additional U.S. troops to Somalia to fight... 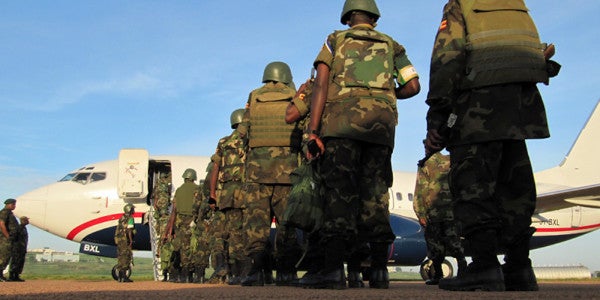 Secretary of Defense James Mattis stated on Thursday that the Pentagon is open to sending additional U.S. troops to Somalia to fight the al Shabab terror group and train the Somali in combatting the al Qaeda offshoot.

'The U.S. military has been involved in Somalia in the effort to build up the Somali capacity to defend itself,” Mattis said during an international conference on security and governance reform in the African country in London on May 11. While Mattis said that President Donald Trump has not discussed future deployments with Somali officials, “that's a decision we'll take if it's broached to us and we'll decide yes or no.”

Mattis' comments came one week after a Navy SEAL was killed during a raid on a remote al Shabab compound in Somalia, the first U.S. service member killed in the war-torn country since 18 military personnel were killed during the infamous 1993 Battle of Mogadishu immortalized in the book and film “Black Hawk Down.”

The prospect of additional boots on the ground in Somalia isn't surprising: As the Washington Post notes, U.S. troops have been engaged with al Shabab for more than a decade, and U.S. military personnel have been working with the Somali government to bolster security forces in their protracted struggle with the jihadists. (According to the Miami Herald, the number of U.S. special operators deployed in the country in Africa has exploded from 1% in 2006 to 17.3% of global U.S. special forces).

But Mattis' statement reflects a White House primed to drastically ramp up military operations in Somalia over the coming years. In March, Trump relaxed restrictions on the rules of engagement governing American troops in the country and, in turn, “laying the groundwork for an escalating campaign,” the New York Times reported:

The decision, according to officials familiar with internal deliberations, gives commanders at the United States Africa Command greater latitude to carry out offensive airstrikes and raids by ground troops against militants with the Qaeda-linked Islamist group Shabab. That sets the stage for an intensified pace of combat there, while increasing the risk that American forces could kill civilians.

Mr. Trump signed a directive on Wednesday declaring parts of Somalia an “area of active hostilities,” where war-zone targeting rules will apply for at least 180 days, the officials said.

The New York Times reported the Pentagon’s request for the expanded targeting authority on March 12, and Gen. Thomas D. Waldhauser, the top officer at Africa Command, publicly acknowledged that he was seeking it at a news conference last Friday. “It’s very important and very helpful for us to have little more flexibility, a little bit more timeliness, in terms of

“It’s very important and very helpful for us to have little more flexibility, a little bit more timeliness, in terms of decision-making process,” General Waldhauser said. “It allows us to prosecute targets in a more rapid fashion.”

But the willingness of the Pentagon to send more troops may prove problematic, just as it has with Afghanistan. In early April, Task & Purpose reported that U.S. AFRICOM chief Waldhauser was charged with “important piece in the next stage of the Global War on Terrorism, and with more autonomy than any U.S. AFRICOM commander has ever had in this era, he has enough rope to hang himself. The Horn of Africa has long been a bit of a trap for U.S. military operations, and special operators have been no exception.”

A few weeks after the White House relaxed the rules of engagement in Somalia, the Pentagon announced that it would send “dozens” of additional ground forces to the country to help equip and train Somali military forces. Based on Mattis' statement, chances are they won't be the last.