The skies above a crucial U.S. military base in Africa are reportedly doing their best impression of a Pink Floyd... 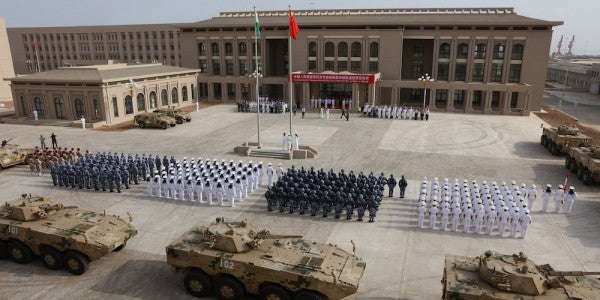 The skies above a crucial U.S. military base in Africa are reportedly doing their best impression of a Pink Floyd laser show at your local planetarium — and that may end up causing major problems at a strategic chokepoint that’s increasingly subject to aggressive competition between global military powers.

The Federal Aviation Administration issued a Notice to Airmen (NOTAM) on May 2 warning aviators about “unauthorized laser activity” and “multiple lazing events involving high power laser ” at coordinates just over a half-mile northwest from a Chinese military installation in Djibouti. The FAA had issued an almost-identical warning the previous week, urging U.S. military personnel to “use extreme caution when transiting near this area.”

Here's the FAA NOTAM on "unauthorized laser activity" near China's Djibouti base. pic.twitter.com/5Vicsbsamw

Chinese military analysts dismissed the implication of that nation’s involvement as “ up rumors” about the newly established base in Djibouti. China is a signatory to the 1995 Protocol on Blinding Laser Weapons that prohibits the use of blinding weapons against living, breathing human beings, but the People’s Liberation Army has publicly pursued blinding laser weapons since at least 2015 and demonstrated laser weapons powerful enough to neutralize small unmanned aerial vehicles.

Whatever the lasers’ origins, the sudden disruption of aviation operations may prove worrying to the Pentagon. Camp Lemonnier, the only permanent U.S. military installation on the entire African continent, is a key nerve center for U.S counterterrorism operations conducted by Combined Joint Task Force-Horn of Africa. With ISIS routed in Iraq and Syria but gaining strength in countries like Niger and Mali (and neighboring terror hotspots in Yemen and Somalia), Lemonnier is an essential organ of the Global War on Terror, second only to Al Udeid Air Base, U.S. Central Command’s forward operating base in Qatar.

But the laser incidents could also underscore the growing competition for a foothold in Djibouti as a major strategic hub, beyond counterterrorism ops. According to the National Interest, Djibouti’s location on the key Gulf of Aden-Suez Canal trade routes has made it particularly appealing to great powers in search of burgeoning new economies to dominate.

China’s new base in Djibouti is intended to “better serve Chinese troops when they escort ships in the Gulf of Aden and the waters off the Somali coast, perform humanitarian rescue, and carry out other international obligations,” state-run news agency Xinhua explained in July 2017, adding that the base “will be conducive to driving Djibouti's economic and social development and assist China's contribution to peace and stability both in Africa and worldwide.”

Those economic opportunities have fueled strategic ones: As early as 2015, Russia was exploring basing opportunities in Djibouti, and Saudi Arabia announced its intent to establish a military base following the unveiling of China’s brand new garrison there.

“Waterfront property in the African countries along the Red Sea seems to be an increasingly hot commodity,” as Congressional Research Service Africa expert Lauren Ploch Blanchard told Task & Purpose in January. “The U.S. and France have had military facilities in Djibouti for over a decade, but the country is getting increasingly crowded. China just opened a base and Saudi Arabia is in talks for one.”

Increasing competition for military footholds will only mean more activity in the skies about Djibouti — and more chances that even a cursory lazing could have potentially fatal consequences. The Pentagon in 2013 relocated a sprawling drone fleet from Camp Lemonnier following a series of alarming drone crashes that worsened the DoD’s relationship with local security forces, per the Washington Post. A 2015 follow-up by the newspaper detailed that skies about Djibouti “have become chronically dangerous, with pilots forced to rely on local air-traffic controllers who fall asleep on the job, commit errors at astronomical rates and are hostile to Americans.”

At the moment, the source of the lazings of aircraft in the skies over Djibouti remains a mystery. But should they continue and, God forbid, trigger a tragic aviation mishap, that laser may be the spark that sets an increasingly militarized and crowded zone aflame.