U.S. Army Africa, in support of U.S. Africa Command, has launched a new program, dubbed African Horizons, to coordinate its... 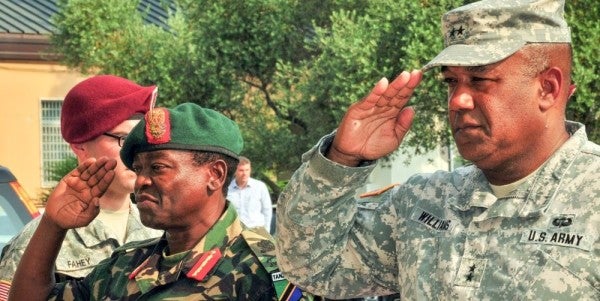 U.S. Army Africa, in support of U.S. Africa Command, has launched a new program, dubbed African Horizons, to coordinate its training and partnership efforts across the continent. When it comes to combating terror groups who don’t operate in a set area and have no defined lines, the U.S. military and its allies need to be able to coordinate efforts and overall strategy across the region.

“African Horizons is how we knit those regions together,” said Maj. Gen. Darryl Williams, the commanding general of Army Africa, in an interview with Army Times.

In East Africa, the U.S. and its allies’ top priority is al Shabaab, a Somali-based militant group linked to al Qaeda. In Central Africa, there’s Boko Haram and in the North, the Islamic State has emerged. To combat these threats, Army Africa must foster relationships between regional powers, and help coordinate their efforts, explained Williams. African Horizons encompasses large-scale regional exercises, as well as small military-to-military engagements.

“We in the Army service component command build partnerships through time,” he said. “It takes time, and hopefully these partnerships enable our African partners to defeat these threats.”