This Motorcycle Club Is On A Mission To Help Homeless Veterans

Seven homeless veterans could start the new year with a roof over their heads and a chance at a fresh... 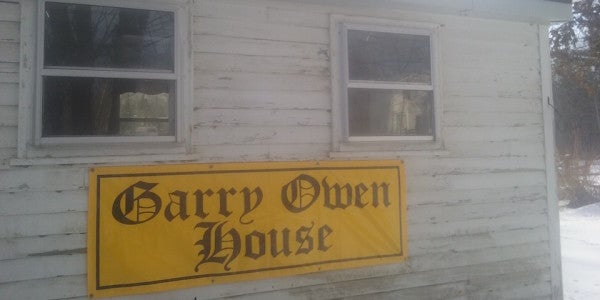 Seven homeless veterans could start the new year with a roof over their heads and a chance at a fresh start thanks to a motorcycle club’s years-long efforts.

In just 12 days, about a dozen members of the Garry Owen Motorcycle Club and a few local contractors made a run-down house at the former Searsmont (Maine) Apple Squeeze site on Route 3 livable again.

“The first couple guys we had in here said, ‘This place is a dump,’” Warren Ard, president of the motorcycle club, said during a tour of the building Wednesday.

Now, the renovated Garry Owen House is prepared for its first residents — a group of eight yet-to-be-selected military veterans, including one to serve as a house manager. The group’s board hopes this is just the beginning of a much larger push to ensure veterans are supported when they hit hard times.

“This will be more than just a transition home,” Ard said. “This will become one large family.”

The board is waiting to receive final insurance approval, hopefully this week, before interviewing potential residents, primarily from Bangor and Portland, and bringing in the first group to start the new year, according to Lou Pelletier, president of the board.

Related: The War On Veteran Homelessness Might Be Winnable »

The house has been in the works for several years. Originally, the board hoped to build a new facility in Montville and set out to raise the estimated $750,000 needed to complete it.

After a sluggish start to fundraising, a consultant recommended that the group start smaller, get experience, and prove that the Garry Owen House could make a difference in order to secure funds from larger donors, Pelletier said.

So, the group recently turned its focus to buildings that were already standing, and it secured a lease through 2020 on the long-vacant house on Route 3. After just two weeks of labor, the group had it ready. Several local contractors also donated materials and labor toward the effort.

Once the Garry Owen House is established in Searsmont, the hope is that its work will prompt more substantial fundraising contributions, allowing the group to open the new, larger Montville facility in a few years. That transitional shelter would have 12-16 beds to start, with a possible expansion to have up to 24 beds, according to Pelletier.

Ard argues that it’s vital for veterans to support one another, as they understand better than anyone what other veterans have been through. Sheltering them under the same roof could be key in helping them recover to the point where they’re able to find steady employment and stay off the streets, he said.

The name Garry Owen comes from Celtic tune “Garryowen,” which was adopted and adapted as a military march by the U.S. Army 1st and 7th Cavalry Regiments, of which Ard was a member from 1974 to 1978.

Organizers hope to address specific needs of veterans, ranging from substance abuse and post-traumatic stress disorder to general mistrust of the government, which may discourage some from seeking help through the Veterans Administration. Garry Owen House will work with existing agencies to provide support for its residents, Waldo Community Action Partners will provide transportation to appointments, local public health agencies will offer social worker and nursing, and Togus VA Medical Center will offer medical care.

Pelletier said the hope is that veterans will use the house as a base to get themselves stable and look for work, and get any physical or emotional support they need from professionals and each other. Residents will be expected to maintain the house, and they may start a garden in the backyard.

“Most of the time, being with other veterans is what helps them get on with their lives,” Pelletier said.

For more information about Garry Owen House, or to donate, visit garryowenhouse.org. Contributions to the group also can be made through Bangor Savings Bank.