He Served In Iraq, But Choke-Holding A Man Going For A Trooper’s Gun Was The ‘Craziest Thing’ He’s Ever Done

Iraq War veteran Darren Phillips was driving on the interstate when he came over a small hill and saw two... 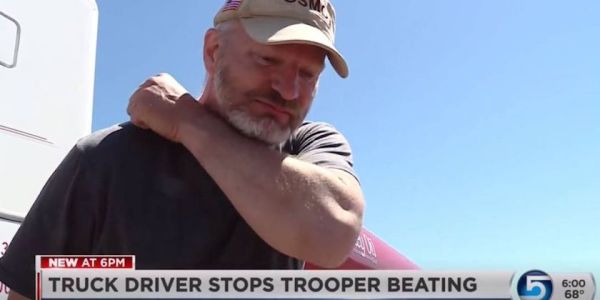 Iraq War veteran Darren Phillips was driving on the interstate when he came over a small hill and saw two men “wrestling around and fighting” — and there was no one else around.

As he got closer, he saw they were a Wyoming state trooper and a man who had been pulled over, KSL reported.

The veteran — now a trucker based out of Utah — then pulled off to the side of the road where the men were fighting May 31, near Green River, Wyoming, USA Today reported.

“I put my brakes on, and I jump out,” Phillips told KSL. “And by this time, the trooper is on his back and the guy is on top of him. The trooper saw me running over, and as soon as I got up to him, he says, ‘He’s going for my gun.' “

Phillips told the Deseret News that he spent 12 years in the Marines and 14 years in the Utah Army Guard — and that's why what he did next came naturally.

He put the man in a chokehold — and he says it was the “craziest thing” he's ever done.

“I did two tours in Iraq, and I never had to put a chokehold on anyone,” he told the TV station. “… After he was handcuffed and they were putting him in the patrol car, as he walks by, he’s like ‘nice chokehold.'”

The Wyoming Highway Patrol posted on Facebook about the incident, which happened about 180 miles northeast of Salt Lake City. “With the help of the citizen, and the other trooper, the suspect was taken into custody,” the department posted.

The fight began after the trooper pulled a vehicle over for speeding, according to the post. But during the traffic stop, the trooper “became suspicious of additional criminal activity.”

“The suspect attempted to disarm the trooper of his handgun,” the post states.

That's when Phillips stopped to help, who was then followed by another trooper.

Both the first trooper and the suspect received minor injuries.

After an investigation, the state patrol found 74 pounds of marijuana and about 1 gram of cocaine in the driver's vehicle.

The suspect, 36-year-old Dustin Roberts, of McKinleyville, California, was arrested.

He is being held with a $125,000 bond for interference with a police officer and three drug offenses, according to the Sweetwater County Detention Center's inmate roster.