Before These Famous Investors Were Famous, They Were Service Members

You made it through basic, then follow-on training in your job field. Maybe you’ve deployed — multiple times. You’ve had... 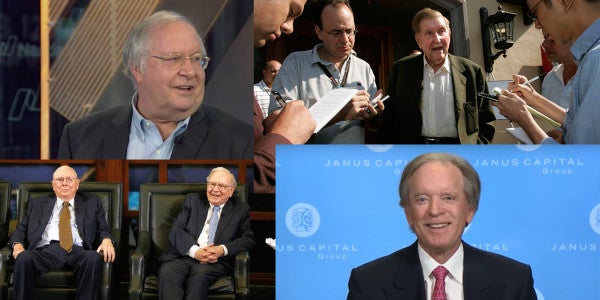 You made it through basic, then follow-on training in your job field. Maybe you’ve deployed — multiple times. You’ve had to navigate the service member’s transient life and figured out how to be a leader, often going on nothing but your own intuitions.

And you think investing is hard? Please.

Trying to make your money work for you can be scary and disorienting. It may seem like something you don’t need to worry about, if you’re still young and spry and interested in blowing your monthly housing allowance on a Yeti cooler ($249.99) that fits in your just-bought Jeep Sahara ($37,845 at a gazillion percent).

But if you could get yourself up to PT at 0600, you can build a nest egg — and you can do it now. Just look at the guys below — all on the Forbes lists of wealthiest American investors, all military veterans. They could do it; so can you. And if you think their time in the ranks didn’t inform their money moves, think again.

Can you even imagine being “the Bond King” of the financial world, with a net worth estimated in the billions? Neither could Bill Gross, when he dropped out of Navy flight school and ended up an engineering officer on an amphibious ship off Vietnam. But after the Navy, Gross studied for an MBA and went on to co-found PIMCO Investments, where his portfolio — with trillions of dollars in assets — became the world’s largest mutual fund.

Today, Gross is an investment manager at Janus, and his television comments can still move markets. A lot of the mettle and the straight talk that made him a financial cause celebre came straight from his Vietnam service.

“The biggest lesson was in terms of speaking up and clearly communicating,” he says. But it’s also taught him to take failure and fear in stride. “The Navy experience was a life or death type of situation in many cases,” he says. “The financial markets are not life or death.

“My time in the Army wasn't like your typical war movie,” Sumner Redstone says of his stint as a World War II Japanese code breaker. “But it was the most demanding, exciting desk job that I could have imagined.”

Redstone built an empire out of his father’s small theater and nightclub chain, becoming a legendary chairman of CBS and Viacom (along with MTV Networks, Simon & Schuster, and Paramount Pictures) through decades of savvy investments and well-timed acquisitions. But it’s his time with “Special Branch Military Intelligence” that set him up for lifelong success.

“I know that even for those of us who served only briefly, the military can be a molding experience,” he says. “I learned that you have to be tenacious — even relentless — and you can't be deterred by obstacles. I've held these beliefs all my life.”

Must be nice to be the guy that Warren Buffett goes to for advice. Munger’s first job was packing groceries in an Omaha store owned by Buffett’s grandfather; he’s been Buffett’s close friend and right-hand man more or less ever since, helping to build up Berkshire Hathaway.

But he didn’t do it with a college degree. He dropped out at 19 to become a meteorology lieutenant in the Army Air Corps when the Second World War was on. After his tour, he took his GI Bill benefits straight to Harvard Law School and never looked back, becoming famous for his philanthropy and investing advice.

And some of that investing advice comes straight from Munger’s time in uniform, where he says card-playing was one of the key skills he learned. “What you have to learn is to fold early when the odds are against you, or if you have a big edge, back it heavily because you don't get a big edge often,” he says. “Opportunity comes, but it doesn't come often, so seize it when it does come.”

Bill Miller’s path to becoming a successful hedge fund manager and charity donor certainly was a different one: During the Vietnam War, he served overseas as an Army intelligence officer… then he studied for a PhD in philosophy from Johns Hopkins.

Now, the Miller Value Partners founder and former manager of the Legg Mason Capital Management Value Trust is a legend in the investing world whose philanthropic giving is as big as his yacht. And he’s had to endure plenty of ups and downs along the way.

Miller doesn’t talk about his service much — intel officers, go figure — but his investment philosophy, a blend of analytics and fortitude, sure sounds military-inspired. Unlike most of his peers, “I have virtually no loss aversion as far as I can tell,” he says. “My view, instead, is that the evidence is overwhelming that most people are too risk averse. And that therefore they should be taking a lot more risk than they feel like is right.” Fortune favors the bold.

In the Military? Tips For Saving Money at Every Stage