Whether You’re In Or Out, Start Planning Your Civilian Retirement Now

Alright, so you’re thinking about your long-term financial security. Maybe you’re tired of making the rounds like a MARPAT-clad Oliver... 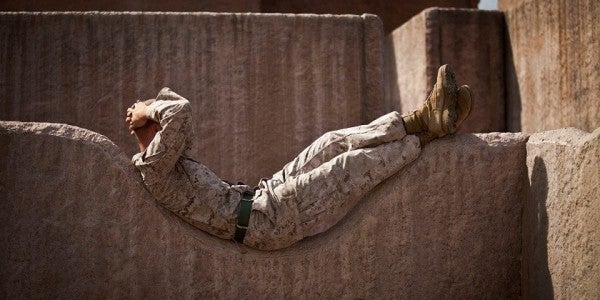 Alright, so you’re thinking about your long-term financial security. Maybe you’re tired of making the rounds like a MARPAT-clad Oliver Twist, cover in hand, begging for more, please, so you can afford your monthly phone bill and streaming service payment.

Whether you’re a belligerent E-4 rounding out your first enlistment before you move on to greener pastures in the 1st Civ Div, or you’re going to stick in the service a while longer, it’s a good idea to plan for the future. And really, who doesn’t want to prepare for a day when your POD calls for you to sit on the beach, drink cocktails with small umbrellas in them, and answer every question with “What do I care, I’m retired”?

Related: How To Get Out Of The Military With A Lot More Paper In Your Wallet Than Just A DD-214 »

To help you get there, we spoke with military veteran financial experts and compiled some top tips for retirement and long-term investment planning.

Sorry champ, you’re not gonna live forever — and SGLI doesn’t stick around after the military.

While Servicemembers' Group Life Insurance is one of the best plans out there — you get a fixed rate, regardless of age and health — it’s exclusively available to the military, which means you can’t take the policy with you when you leave the service.

“It's a good idea to lock up an inexpensive term life insurance policy when you are young and the policy is relatively inexpensive,” says Ryan Guina, an Air Force veteran, guardsman and the founder of The Military Wallet, a financial news site geared toward service members.

Think about paying into a new policy that covers the military — not all do — just before you get out of the service; that way there’ll be no gap in coverage.

Buy a house, or nah?

Sure, the military provides you with base quarters or a housing allowance, but knowing which one to choose can be tough. It might feel like a waste not to use your housing allowance to buy a home, but homeownership comes with its own risks.

“Many military members frequently relocate, leaving them on the hook to either sell their home — often on short notice — or to become a long-distance landlord,” Guina tells T&P.; “I've seen people do very well with real estate, and I've seen people lose a small fortune.”

If you can afford to manage a property at a remove — or to just hang on to it until the market’s in your favor — then buying might be the smart play. But take a sober assessment of your own financials and comfort zone first. “It's almost impossible to make a blanket statement regarding whether someone should buy or rent,” Guina says, “so the best advice I have is to do a lot of research before making your decision.”

Start pouring cash into retirement plans while you’re in…

…Because, by and large, retirement plans are bupkis in the private sector, especially when you start your post-mil career. It helps to start putting cash into retirement when you’re young, have a steady paycheck, and decent retirement options… i.e., when you’re still in the military. But there’s no time like the present.

“I recommend everyone start investing for retirement right away,” Guina says. “The benefit of starting young is having more time for compound interest to work its magic. The more you invest today, the less you will need to invest later.”

Here are a few retirement options to consider:

If you’re already out, you still have plenty of options.

If you’ve already left the service and have an emergency fund set up (read how best to squirrel away cash for your “oh shit I’m unemployed” savings account, here), it’s a good idea to consider an employer sponsored retirement plan, like a 401K, or 403B says Curtis Sheldon, the lead financial planner of C.L. Sheldon & Company and a former Air Force fighter pilot.

You should plan to put roughly 10% of your monthly earnings into retirement, Sheldon says, “and hopefully you’ll get some employer-matching, as well.”

If the idea of actively investing is too overwhelming, just put it on autopilot.

“It’s really really hard to try to beat the market,” Sheldon continues. “So you’re much better off just investing for the long term — and there’s nothing wrong with being just a passive investor. You’re going to have some up days and some down days. And people will say that if it goes up, it’s going to come down, but if you look at the stock market since 1929, in the short term it’s gone down, but over the long term it’s only gone up.”

Regardless of how you choose to invest, just make sure you actually do it.

“The biggest single predictor of your success is getting started, and getting started now,” Sheldon says.“There’s an example a lot of people use to show the magic of compound interest and it’s this: You start with a penny and you double it every day for a month. The first day you have one penny, the second day you have two, the third day you have four. At the end of the month you’ll have $10,000,000. But if you start one day later, you don’t lose a penny, you lose $5,000,000.”

That is why “it’s so critical to start now,” no matter when “now” is for you, Sheldon says.

“Every day you delay it, you’re leaving money on the table in the future.”

In the Military? Try These Tactics to Save For Retirement

Editor’s note: This article is brought to you by Stash. Get more of their financial tips for troops and veterans here.

The average American will need to have between $1 and $1.5 million stashed away for retirement. And given that the average U.S. soldier doesn’t make an extraordinary amount of money, putting together a retirement plan–and starting early–is incredibly important.

Whether you plan to re-enlist until you hit retirement age, or transition to the civilian world as soon as your enlistment is up, it’s a good idea to start planning for retirement right now.

Why is it so important? You can’t expect your pension to support you for the rest of your life. If you qualify for one at all, you’ll likely to need more than you think.

Whether you’re an E-1 private or a 4-star general, here’s what you can do now to start planning for retirement.

The most significant thing you can do (whether you’re in the military or not) is to put a budget together and control your spending.

“Many enlisted military (members) join straight from high school and have little to no experience with a budget or tracking their spending,” says Eric Jorgensen, a 20-year U.S. Navy veteran, and director of financial planning at Maryland-based Turning Point Financial.

“Many of us purchased sports cars, putting us into a position where we were living paycheck to paycheck.”

“When I was active duty the Thrift Savings Plan [The military’s 401(k) equivalent] didn’t exist, and commands didn’t spend much time educating us about finance,” Jorgensen says.

As a result, many of his colleagues overspent, which put them in a position of living from paycheck to paycheck. Get a grasp on your spending habits, and start planning for the long-term sooner rather than later.

2. Maximize and take advantage of your benefits

Military members can access a number of benefits that aren’t available to civilians. So if you’re currently enlisted, or a veteran, it’s worth familiarizing yourself with what’s available.

The Servicemembers Civil Relief Act, for example, offers financial protections for those who are deployed, including stopping repossessions and preventing evictions.

There are also federal programs that help with tuition assistance, home loans from the Department of Veterans Affairs, and high-interest savings accounts while members are deployed. The Department of Defense’s Savings Deposit Program is one example, that’s a savings account offering interest rates up to 10%.

Just like in the private sector, the military has savings and retirement plans that soldiers can opt into. And you don’t want to forget about those.

The main plan is the Thrift Savings Plan, which is similar to a 401(k) for service members.

“While the choices in [TSP] are not outstanding, mostly limited to index and target date funds, it is still a way for service members to put away a portion of their earnings on a pre-tax basis,” Nager says.

The military, traditionally, had a pension system that kicked in after 20 years of service. But as of the beginning of 2018, that system has been revamped into the Blended Retirement System, which, as you may have guessed, blends the old pension system with the BRS. The BRS adds a contribution requirement to the pension system.

4. Think beyond your enlistment

The vast majority of servicemembers will leave the military at a relatively young age, typically in their early to mid-twenties. That means there’s an awful lot of “life” left before retirement, and that soldiers will need to find employment outside of the military.

You’ll need to consider your financial needs beyond enlistment. Even if you’re still eligible for the military’s pension plan, you’re likely going to need to continue earning money to save for retirement. The net value of a pension is roughly $200,000 for an enlisted soldier, and $700,000 for an officer, which isn’t enough to cover the average expected retirement.

Most soldiers don’t spend decades in uniform, and only around 20% end up qualifying for a military pension. So, like civilians, members of the military can make the most of their earnings by saving and investing early and often.

It may also be a good idea to begin contributing to an IRA, in addition to your TSP. Your money can grow tax-deferred and offer you another valuable nest-egg for your later years.