The military has a retention problem, and Pentagon and branch officials are scrambling to come up with incentives to keep... 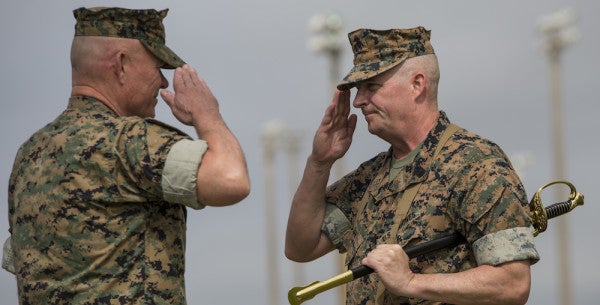 The military has a retention problem, and Pentagon and branch officials are scrambling to come up with incentives to keep service members from separating or retiring. In order to try and stave off retirement among the most experienced senior enlisted service members, the Defense Department is looking at retirement benefits as incentives for recruitment and retention. It now wants to remove eligibility limits on the dollar-for-dollar contributions for made to enlisted troops’ 401(k) accounts under the new “blended retirement system.”

The system, which will take effect on January 1, 2018, combines two sources of retirement income for veterans: the existing retirement money for those who served 20 or more years, and the Thrift Savings Plan — a 401(k) retirement account with matching government contributions that allow members to invest their own money in stocks or government securities. What service members put away, the Pentagon matches — but only up to 26 years.

By lifting that cap, enlisted service members who spend their working lives in the military will be able to accrue a hefty sum of retirement savings by investing on their own.

“We believe that, in the future, this will help to encourage our most experienced and capable enlisted members to stay in the military to fill critical leadership positions,” said Johnny Michael, a Pentagon spokesman told Military Times.

This would be just one of the many facets of the military’s new blended retirement system. Writes DoughRoller:

Current law says that service members will receive the number of years in service times 2.5, to calculate what percentage of their base pay they can expect to collect each year in retirement. Generally, you need to serve for 20 years to retire, and when you retire with 20 years of service you’ll receive 50% of your base pay. If you choose the new plan, that multiplier of 2.5 reduces to 2.0, so you’ll only receive 40% of your base pay at 20 years. The matching contributions of 5% will cease after 26 years in service, but you can still earn the 2.0 multiplier on your base pay until you retire.

“The 26-year mark is where the military offers one final raise,” Retired Air Force Col. Dan Merry with the Military Officers Association of America told Task & Purpose. Before, he said, “The argument was if you weren’t already separated” by that point of service, “they asked you to leave anyway.”

Now, career service members may be inclined to stay past the 26-year mark.

“We don’t want to disincentivize, and we don’t want to fail to reward those with longer terms of service or those who have achieved ranks,” Merry added. ”We are part of merit system. If you’ve done the time, you deserve to be compensated.”

At present however, the Pentagon is only seeking to lift matching contribution limits for enlisted service members, not officers.

“[We] urged lawmakers and the DoD to extend TSP matching beyond 20 years of service, arguing that matching should be extended for the duration of service,” Ted Painter, the National Legislative Director for the American Military Retirees Association told Task & Purpose. “AMRA supports TSP matching beyond 26 years for Non-Commissioned Officers and believes that this extension should be provided to officers and warrant officers as well.”

But the 26-year limit isn’t the only concern that veteran service organizations have with the new blended system.

For Merry, who dealt with personnel issues for 32 years in the Air Force, having a consistent system is a huge issue. “There should be some predictability,” he said.

The military’s TSP account system does not necessarily mean all troops will be wealthy in retirement. Like a typical 401(K), you only get out of it what you put into it — and you can lose some of those savings in market fluctuations. While everyone who makes it to 20 years currently gets half their exiting base salary in pension, TSP can supplement that retirement kitty with service member savings and earnings.

Still, Merry notes, it’s only valuable in that capacity if you make it a point to save your own money. Among younger service members, he said, “It’s hard to compete with fast cars, tattoos and parties.”