DoD Might Renege On Enlistment Contracts For Foreign-Born Service Members

About 1,000 foreign-born service members who enlisted under the Delayed Entry Program but whose visas have expired could have their... 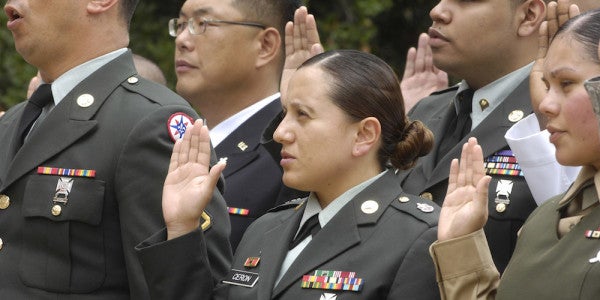 About 1,000 foreign-born service members who enlisted under the Delayed Entry Program but whose visas have expired could have their military contracts canceled and face deportation under a proposed Department of Defense policy, the Washington Post reports.

In his first dispatch as a reporter for the newspaper, Army veteran Alex Horton obtained an “undated action memo” for Secretary of Defense James Mattis that details “potential security threats of immigrants recruited in a program designed to award fast-tracked citizenship in exchange for urgently needed medical and language skills.”

Under that Military Accessions Vital to National Interest (MAVNI) program, the U.S. armed services have recruited more than 10,000 “legal aliens” with critical mission skills like medicine or cultural and linguistic expertise since 2009. But the DoD memo reveals that since last year, Pentagon planners have been putting those service members, as well as new MAVNI recruits, through an extreme vetting process that’s drained “Army fiscal and manpower resources.”

As a result, memo’s unidentified DoD authors recommend “canceling enlistment contracts for all 1,800 awaiting orders for basic training, and halting the program altogether,” Horton reports. Most of those enlistees are DEPpers who are already preparing for military service while they await their recruit-training entry.

Ironically, those DEP enlistees could end up in immediate danger of deportation if they are dropped off their contracts; military recruiting commands already have their contact information and deep background data. Most of the recruits’ immigrant visas expired while they were awaiting a boot-camp report date, but under the proposal laid out in the DoD memo, none would get special consideration as a result.

Besides representing a total renege on its commitment to enlistees, the added scrutiny to immigrant service members was based more on prejudices than on hard evidence or cold reason, according to retired Army officer Margaret Stock, who helped stand up the MAVNI program in 2009.

“It’s okay to investigate someone with a legitimate security threat,” she told the Post. “But share a characteristic they don’t like, which is they’re foreigners. They’re going to be treated as second-class citizens for their entire career.”