Reforming the military’s retirement system is currently a hot topic in our nation’s capital. Both the House and Senate versions... 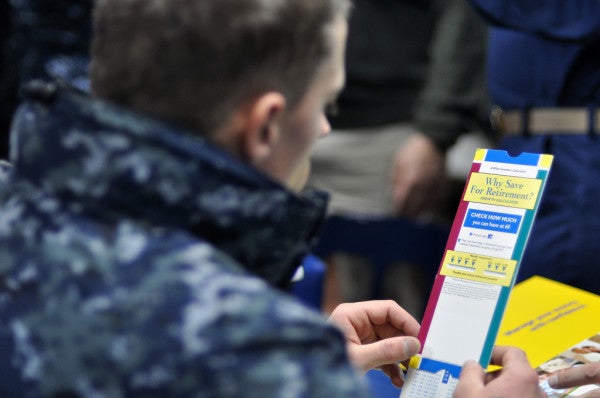 Reforming the military’s retirement system is currently a hot topic in our nation’s capital. Both the House and Senate versions of the National Defense Authorization Act include proposals for retirement reform; the joint chiefs have weighed in; and the Department of Defense released a white paper last week outlining its position on the reforms. These proposals consist of two main courses of action: matching Thrift Savings Plan contributions for all service members similar to those available to what civilian government employees receive under the Federal Employee Retirement System, and a reduction in the multiplier used to calculate retirement pay after 20 years.

The Military Compensation and Retirement Modernization Commission’s final report, which laid out the framework for current reforms, states that “the Services require flexible, modern, and relevant compensation tools to continue to recruit and retain the high-quality men and women.”

An enlisted service member, who enlists as an E-1 and advances one pay grade a year during the first four years would earn approximately $1,000 worth of government contributions — assuming salaries don’t drastically increase — and growth before matching contributions began. After matching contributions kick in, the value of each service member’s retirement account would depend on individual promotion rates, contribution amounts, and market performance. If a one-term enlistee separated at 22 and his Thrift Savings Plan earned 8% annually, its balance would be just under $30,000 at age 65. If you think this is low, it is because it is.

If the program were instead structured similarly to the federal employee system and that same one-term enlistee deferred 5% of his base pay with a 5% matching contribution during the course of her four-year enlistment while earning 8% annually, he would have a $10,000 balance in his account. At 65, this would grow to around $280,000, $135,000 of which would be the result of the matching contributions. For enlisted service members who complete more than one enlistment, the value of government contributions would be even higher due to compound growth. The DoD’s proposal would save under $4,000 per enlistee over four years while reducing the projected value of government contributions to each enlistee’s Thrift Savings Plan by over $100,000 at retirement. The Military Compensation and Retirement Modernization Commission reported that over 50% of enlistees leave the military after four years, which means the majority of enlisted recruits would not receive this benefit. The commission offered that this would serve as a retention tool for short-term troops, according to Military Times. Yet, there seems to be some inconsistency among leadership. Gen. Mark Welsh, Air Force Chief of Staff, was quoted justifying the delay in matching contributions until after four years by stating, “that way you actually think through: How much of your money do you really want to put in this TSP account?”

Fortunately, the administrative aspects of matching contributions have the potential to be flexible and modern. Currently, the Thrift Savings Plan consists of the G, F, C, I, S, and lifecycle funds. The G fund shields money from market risk while limiting growth potential by investing in U.S. government bonds. The F, C, I, and S funds are all index funds that follow the performance of a specific market benchmark, such as the S&P; 500. The lifecycle funds consist of varying allocation mixes between G, F, C, I, and S based on projected retirement date and offer an easy-to-use option for retirement planning, since each fund is labeled by its intended retirement year (eg., L2040 or L2050). While the F, C, I, S, or lifecycle funds are exposed to market risk, they must be used in order for a participant’s account to earn a return above inflation.

When a service member decides to allocate money to his Thrift Savings Plan account, that money is invested in the G fund. If he would like to invest his money outside of the G fund, he must wait until he receives his account information from the Thrift Savings Plan, log onto the website, and then choose how to allocate his money. In order to invest outside of the G fund, he must log onto tsp.gov and designate which funds to invest in. This sounds very simple, but when a service member sets his allocations on MyPay he is not told what the default is. Instead, MyPay only instructs him to visit tsp.gov “to change the allocation of your TSP contribution among G, F, C, S and I investment funds.” Furthermore, he cannot log onto tsp.gov until he receives an account number and access code separately in the mail. The requirement to initially do business via post creates an unnecessary hardship on service members, especially junior ones, who are relatively transient and can go months or years without a static mailing address.

I know of a number of service members who allocated money for their entire careers, but did not earn any returns on their retirement savings because they never invested outside of the G fund. Therefore, the default investment method needs to change. Ideally, a service member would be able to determine which funds she wants to invest in when opting into a Thrift Savings Plan account, whether on MyPay or during initial entry training, or when changing the size of her allocations. However, if this is not possible, then the default fund should be the lifecycle fund closest to her social security eligibility age rather than the G fund. This change would ensure that all contributions have the opportunity to grow over a service member’s life instead of acting as a savings account. The DoD’s white paper proposes to auto-enroll service members in the Roth TSP until they receive financial literacy training at a permanent duty station. If this becomes official policy, it would not be a large step for service members’ contributions to be automatically allocated in a lifecycle fund as well. Then, after receiving financial literacy training, a service member could have the choice to allocate contributions directly from MyPay when adjusting allocation size.

In light of the DoD’s proposal, changing the retirement benefit for career service members looks like it will be a bad deal. According to the Military Compensation and Retirement Modernization Commission, approximately 17% of service members serve the 20 years required to receive a defined benefit pension. The commission recommended reducing the defined benefit at 20 years, but making up for the difference through a bonus at 12 years and matching contributions. In addition to delaying the onset of matching contributions, the DoD proposed to eliminate a standardized retention bonus at 12 years of service in favor of a variable continuation pay offered between 8 and 16 years of service. While this may seem to offer the military more flexibility, it would change continuation pay from a set, statutorily guaranteed amount to an amount dependent on the whims of each service and the budgetary environment. This policy expects career service members to accept a reduction in their defined benefit in exchange for minimal matching contributions and the possibility of receiving continuation pay at some point.

A defined benefit pension is a retirement benefit that promises a specific payout during retirement, as opposed to a defined contribution benefit such as matching Thrift Savings Plan contributions. Both uniformed service members and civilian federal employees are eligible for a defined benefit, but the regulations related to the military benefit are significantly less onerous. Most importantly, a service member can retire and begin receiving payments as soon as her benefit is vested, but a civilian cannot retire and receive payments until his minimum retirement age — 57 for everyone born after 1970. Additionally, military service members contribute nothing to the maintenance of their defined benefits, while civilian federal employees are expected to contribute annually to the federal system. These differences highlight something important about the military’s defined benefit retirement: It serves as lifelong compensation for the unique hardships associated with a full military career.

The DoD’s proposal for implementing retirement reform falls short when viewed in this light. Specifically, the DoD’s stance that “while the Department generally views flexibility favorably, none of the Services foresee using this authority, the potential difficulties in execution outweighed any perceived benefit.” Given the operational tempo of the past 14 years, and the once-in-a-lifetime opportunity that this reform represents, wouldn’t it be appropriate to discuss whether 20 years is the right amount of time for vesting a defined benefit? For example, if someone enlisted in October 2001 and has served continuously on active duty since then, why shouldn’t that be considered a full career? It would not be unusual for such a person to have spent six or seven years deployed, and he or she would have seen both the declared beginning and declared end of our efforts in Afghanistan and Iraq. Although the proposed reforms will not impact current service members and contemplating another war is less than pleasant, these reforms will impact the next generation of American service members. If the current personnel reform efforts are successful, the Americans who fight the next war will be less likely to spend 20 continuous years in uniform. Perhaps the defined benefit should not be based solely on time in service, but instead on what that service has consisted of.

The current reform seems to have officers in mind, who are relatively well-compensated and whose education may better prepare them for a transition to civilian life. It therefore leaves one-term enlisted recruits and enlisted retirees out to dry in order to fund a benefit for the remainder of the force. An E-7 retiring after 20 years would receive around $28,000 each year under the current proposed system. If this E-7 had a non-working spouse and three kids, depending on his retirement pay alone would place his family below the poverty threshold. Reducing the size of his defined benefit pension, eliminating guaranteed continuation pay, and limiting matching contributions could place his family in dire financial straights.

Congress, military officials, and the DoD agree that it is time to reform the military’s compensation and retirement structures. The halfway reforms proposed by DoD are not flexible, not modern, and irrelevant; they would be worse than no change at all. Instead of providing recruitment and retentions tools that are both cost-effective and effective, the DoD’s proposal would reduce the cost of military retirement benefits by reducing the efficacy of the recruitment and retention tools available to the military. If our government is going to make a major change that impacts the quality of our military’s recruits and personnel, our government should be willing to put in the work to get it right.

These reforms were initiated to provide “flexible, modern, and relevant compensation tools” to the military services, and Congress should enact nothing less than exactly that.