Despite Reports, Unemployment Is Still A Major Issue For Veterans

Recently, The Los Angeles Timespublished an article by Alan Zarembo that stated high veteran unemployment appears to be a thing... 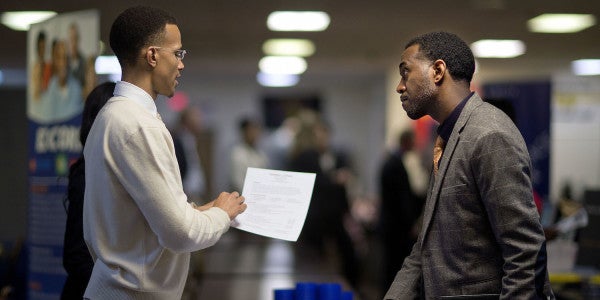 Recently, The Los Angeles Timespublished an article by Alan Zarembo that stated high veteran unemployment appears to be a thing of the past. This is patently untrue both nationally and in the Los Angeles area. As the executive director of the Call of Duty Endowment, a nonprofit that has funded the placement of over 17,400 veterans into high-quality jobs, I work daily with organizations in the veteran employment space. We don’t see their unemployment waning.

In fact, 30% of our partners report that they have waitlists for their services, even in the face of expanding capabilities.

The Bureau of Labor Statistics’ monthly unemployment numbers that Zarembo cites simply don't reflect reality. Its methodology for obtaining data on veterans is deeply flawed, as it doesn’t count people who have not looked for a job in the last four weeks or people who work part time and are underemployed.

Jim Clifton, the CEO of Gallup, calls this “the Big Lie,” and he’s right — we have a bigger unemployment problem than the government realizes, and the situation with veterans is even worse. As Clifton pointed out, if a person accepted $20 in the last week for mowing someone’s lawn, the government considers them employed. I think we can all agree that no one can live on $20 per week.

The way the Bureau of Labor Statistics attempts to describe veterans within their statistics is also problematic. The monthly numbers they report are highly erratic and not designed to representatively sample the veteran population. Nor are they seasonally adjusted, which calls into question their validity. Even the Bureau’s much ballyhooed annual veteran’s unemployment report — published in March each year and containing more in-depth questions of the vets they capture — is also not designed from the ground up to sample a representative veteran population.

What I can say with confidence is, in surveying the nonprofits we fund who served over 20,000 veterans this year, is that one-third had a waiting list for their services despite recent growth in capacity. Additionally, eight of the nine organizations have seen an increase in demand for their services this year. Keep in mind that this is only nine nonprofits and only counts those veterans walking in the door asking for help. Moreover, these nine non-profits are a small fraction of the over 26,000 non-profits that GuideStar.org says are serving U.S. veteran populations.

Several local studies show an even more challenging picture. TheCenter for a New American Security’s study from November shows a 30% unemployment rate among veterans in Western Pennsylvania — a region that contains 1% of the nation’s vets. Furthermore, last year’sLA County Veterans Study by the University of Southern California showed that almost 80% of veterans coming to Los Angeles County — the largest concentration of vets in the nation — went there jobless.