I Live In The Suburbs Now. All I Want Is The Thrill Of Deployment Again 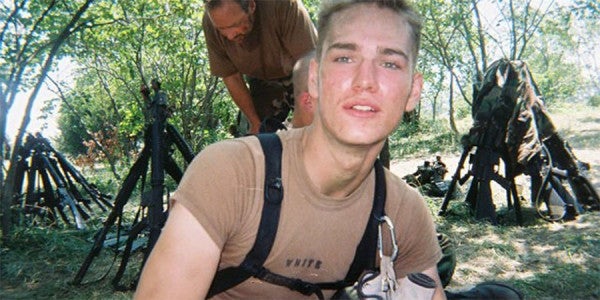 I bought my first house this year in an up-and-coming neighborhood. I know it’s up-and-coming because half the houses on my street are being remodeled, and recently a guy was tasered twice by police down the street.

As cars sped past my living room, I went outside. I was angry they were speeding because I walk my dog on that road and it was dark. I wanted to protect my dog from the idea of a threat, even though he wasn’t in danger at that moment. I saw blue and red emergency lights reflecting off the nearby houses, but cars and trees were obscuring whatever it was they were doing.

I heard a voice over a loudspeaker telling someone to exit a car with their hands on their head. The voice was commanding, but a little uncertain. It repeated itself: “Put your hands on your head!” Excited, I climbed on top of my too-big steel smoker to get a better view.

The shots that followed sounded like little .22 pistols, but cops don’t carry those. I got down from the smoker and was concealed in the darkness of my backyard as I listened for what came next. I heard the humming sound of a closed electrified circuit and radios squawking. I went inside.

After a moment, whatever had happened outside seemed to be over, but I still felt excited. The adrenaline of merely witnessing it made me miss my old life — one I lived in Iraq and Afghanistan.

I found myself savoring the feeling. I haven’t found anything to replace it. I don’t think any of us really have. Motorcycling comes close, because it requires a certain constant multi-tasking focus to keep you from dying that is both encompassing and routine. It’s familiar.

I came back from Afghanistan to fruitlessly try to stop my divorce. I’ve been home — whatever that means — for a year and a half, but I miss having a purpose.

I'd go back, but I'm not young and naive anymore. I was 20 years old the first time I went to Iraq. I was 30 when I left for Afghanistan. It was what I knew. But, it’s not the same when you’re a contractor. If you're not forced to be there, to willfully enter that world, maybe you have to be young, naive, or worse.

So I stay home. I go to work. I make my mortgage payments and try to figure it out like all of us. I care for my dog, because he depends on me, like my Joes once did in a different life. It’s familiar.

I'll ride my motorcycle to feel familiarity: the ever-present danger, the sensation of weather on my body, the juxtaposition of my agency versus my sense of utter helplessness. There is no danger in my life now that I do not create myself. In another life, my face was always reddened by the sun, but now I have to make time to be outside of my office. The extreme highs and lows of my once life are replaced by mundane comfort.

Maybe wanting to go back to war is similar to how we date a type. I know from divorce counseling that we pick a partner not because it’s someone we need, but because it’s someone that's familiar. This is so we can relive and deal with past trauma. And we won't ever change, not really. It's too late. Your past created you and it's inescapable.

But you can look for signs of your past, work toward understanding it, and prepare for the future. So I think about the old unknown world and remember when I traveled so far to find it, not knowing that it was already behind me.

These days, when I catch violence, I think about times thankfully passed and yearn for a future that’s familiar.

Richard White is a freelance writer, former private security contractor, and former soldier and airman. He is the author of Insurgentsia, a blog on conflict. Follow him on Twitter @CheekyAmriki.