The headline jumped at me like a Bouncing Betty: “Department of Defense Planning to Let Illegal Immigrants Enlist.” The words... 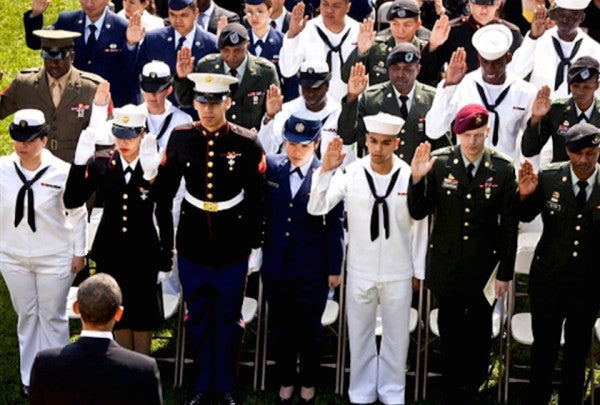 The headline jumped at me like a Bouncing Betty: “Department of Defense Planning to Let Illegal Immigrants Enlist.” The words evoke images of prison-tattooed gang members wading across the Rio Grande, sprinting from exhausted Border Patrol agents to the nearest recruiting office, exclaiming “Sign me up, pendejo!” and giving an MS-13 salute as they board the bus for Benning. The story was, on its face, too unrealistic to believe. There had to be more to it than what the headline suggested.

I’m extremely interested in the topic of immigrants in the military, for several reasons. My family is originally from Mexico, although my ancestors came to America about a hundred years ago. My great-grandfather was either drafted into or joined the U.S. Army not long after he arrived (I have no idea what his immigration status was). He had completed training and was at the station waiting to board a train to a troop ship heading to the battlefields of the Great War, when a loudspeaker announced the Armistice. All of his sons save one served in the military during World War II or Korea. His oldest son, my great uncle Leo, was killed in the Bataan Death March. His youngest son, my great uncle Richard, was a Marine in Korea. Generations later, his descendants — me and my niece — are still serving.

I’ve spent time in Europe, Iraq, and Afghanistan, where I met many people who desperately wanted to become American soldiers. I served as a United Nations police officer in Kosovo from 2000 to 2002; after 9/11 many Albanian Muslims, furious that America had been attacked, asked me how they could join the U.S. military to fight al-Qaeda. At least one of the Albanians I worked with did, and served as a Marine in Afghanistan. Two Afghan translators I served in combat with are now living in the United States, and one contacted an Army recruiter within a week of arriving here.

In Afghanistan I was on a French firebase, and was surprised when French soldiers asked me how to immigrate to America. One even used the phrase “American Dream” when I asked why he wanted to leave France. A French Marine I was on many missions with actually did move to America, is now married to a California girl and eagerly awaiting his citizenship. He hopes to be Special Forces someday.

And then there’s Rafael Peralta. Peralta was an illegal immigrant who eventually got his green card and joined the Marines the next day. He was killed while clearing a house during Fallujah II. Whatever the truth about how he died, he entered the United States illegally, but then became a Marine, and died serving the United States.

I know that immigrants, even illegal ones, can be patriotic Americans willing to give their lives for their adopted country. And I generally believe that anyone willing and qualified to serve should be able to. Especially when we’re at war.

But on the other hand…

American-citizen combat veterans, some of whom are deployed, are being told they can’t re-enlist. Men and women who have already risked their lives for their nation and planned on making the military a career are being forced out. Yet citizens of other nations, who have enter the country illegally, are being allowed in? How can that possibly be fair?

Additionally, we’re quite possibly inviting more people to come here illegally by accepting them into the military. The border crisis in my home state of Texas is strongly suspected to have been sparked by a rumor that immigrants who crossed the border, once here, would be allowed to stay. That’s why so many have crossed and turned themselves in, rather than hiding.

Fortunately, the “illegals in the military” headline didn’t accurately describe the situation. The military hasn’t been opened to all illegal immigrants. It’s opened to just a few, under very specific conditions. Only those brought here by their parents when they were younger than 16 will be eligible to join, and only if they’ve already received a deportation deferral, and then only if they have critical skills (such as fluency in Arabic or Farsi, or specialized medical training). The law is a new provision of an existing program called Military Accessions Vital to National Interest, which already targeted non-citizens with critical skills who held visas, but not resident alien status. The program is capped at 1,500 recruits per year, and the number of illegal immigrants who manage to join will likely be only a small percentage of that number. The net result is almost no result at all. And the law seems to make sense.

If someone was brought to the United States as a child, grew up here, possesses a desired skill, is otherwise qualified and wants to serve, what good does it do to deport him rather than let him enlist? When we have so many Americans who would never consider military service, I applaud those from other countries who volunteer to protect our country.

Undoubtedly, some of them are just doing it for citizenship. But we have red-blooded Americans in the military now who joined for purely selfish reasons, totally separate from the notion of serving this nation. We don’t kick them out, nor do we expect anything more from them than the minimums. My gut feeling is that illegal immigrants permitted to join the military as a path to citizenship won’t float at the bottom of the pond, so to speak. They know military service is their golden ticket, so they have an incentive not to screw it up.

As far as the career soldiers being forced out of the military, I don’t see how this affects them. Whether illegal immigrants are being allowed into the military or not, those soldiers are being downsized. This program, in any form, doesn’t change that.

So in the end, this law doesn’t seem to be the opened gate to hell it originally seemed. Then again, the law in its present state may not be the real worry. Perhaps this is simply another stepping stone to widened amnesty, a way to gain future votes from millions of “undocumented Democrats.” Maybe.

But for now, I’ll accept the law as is, understanding that it’s a pragmatic means to handle a complex problem. I’ll be happy to shake hands with the first formerly-illegal-immigrant-now-American soldier I meet. I’ll give him the same benefit of the doubt I’d give to any other soldier, unless he does something to remove that benefit. Once someone has sworn loyalty to this country, and does his job like every other soldier, I don’t really care where he’s from. All I care about is whether or not he has my back.