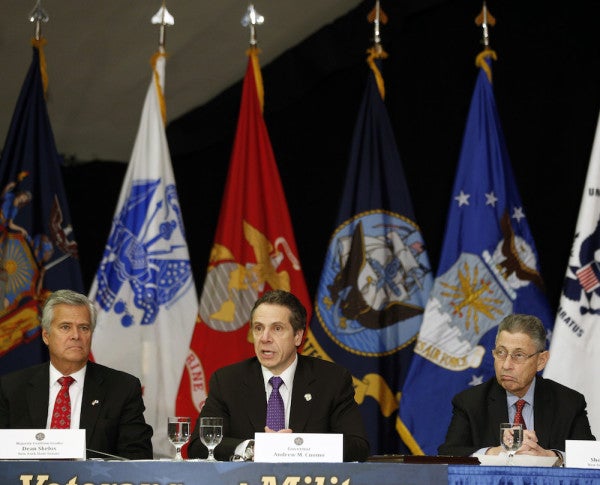 Does the above sentence make any sense to you? We didn’t think so.

But apparently that’s how New York state’s government sees it, according to the Military Service Credit section of the state’s Retirement and Social Security Law. That law details which military veterans, who have since become members of a public retirement system in the state, are eligible to purchase up to three years of pension service credit for their military service.

In other words, they can retire three years earlier and still receive a full pension in exchange for paying a percentage of their current salary, varying according to their experience, for each year of past military service they want credit for. This includes all honorably discharged veterans who have become public teachers, police officers, firefighters, and local government and state employees.

The law determines which veterans are eligible based on where and when they served, broken down into five distinct service periods. The first three periods correspond to World War II, the Korean War, and the Vietnam War era. Any veteran who served during those periods, regardless of where they served, is eligible for the credit. The next period of eligibility applies only to veterans who received an Armed Forces, Navy, or Marine Corps Expeditionary Medal in connection with the conflicts in Lebanon (June 1983 – Dec. 1987), Grenada (Oct. 1983 – Nov. 1983), and Panama (Dec. 1989 – Jan. 1990).

In the last period — Aug. 1990 to the present day — only veterans who served in Iraq, Kuwait, Saudi Arabia, Bahrain, Qatar, United Arab Emirates, Oman, the Gulf of Aden, the Gulf of Oman, the Persian Gulf, and the Red Sea are eligible for the credit.

This law is full of arbitrary restrictions and gaping holes. Conspicuously missing is any mention of Afghanistan, the longest war in American history. That means no veteran can become eligible for serving in Afghanistan at any time. Yet a soldier who remained stateside during the Vietnam War can.

A Navy SEAL who took part in the successful 2011 mission to kill Osama bin Laden would be ineligible simply because that action took place on Pakistani soil. Veterans who served in other combat zones, like the Balkans and Somalia in the 1990s, including the 1993 Battle of Mogadishu that inspired the “Black Hawk Down” film, are also ineligible. The same goes for veterans who served elsewhere during the Cold War and after.

“I don’t know who makes up these rules,” said Kevin McCawley, 54, a Metropolitan Transit Authority employee and U.S. Marine Corps veteran, in an interview with Task & Purpose. “I don’t know what kind of sense this makes to the person who is making this law.”

McCawley, who works in communications for the transit authority as a telephone maintainer, is not eligible for pension service credit because he served from 1979 to 1983. “I joined during peacetime, but if a war had come up, I would have gone,” McCawley said.

He pointed to last week’s deadly crash of a Black Hawk helicopter during a training exercise as an example of why all veterans should be eligible under the current law. “Even the peacetime military can be a dangerous place, but when you join, you join knowing that and accepting that,” McCawley said.

Last year, New York’s state Legislature passed a bill that would have changed the law to allow all veterans to purchase up to three years of pension service credit regardless of when and where they served. Although it passed nearly unanimously, New York’s governor, Andrew Cuomo, vetoed it when it was delivered to his office because the Legislature had not appropriated any state funding for the bill. In a November 2014 letter to the State Senate explaining his veto, Cuomo called the bill an “oppressive unfunded mandate” that would fall on the shoulders of local governments and taxpayers.

The governor estimated that approval of the bill would cost local governments a total of $57 million annually in near-term obligations. “A bill that would require such tremendous expenditure of state resources and local taxpayer money … should be raised only in the broader context of negotiating the State budget,” Cuomo concluded in his veto letter.

Cuomo’s office did not return Task & Purpose’s requests for comments regarding this story.

In late January, Assemblywoman Amy Paulin introduced a new bill with the same purpose of changing the current law’s arbitrary requirements, dubbed the Veterans’ Equality Act. The proposed bill, like its predecessor, would allow all honorably discharged veterans who are members of a public retirement system to purchase up to three years of pension service credit for military service anytime and anywhere, as long as they have at least five years of credited service outside of the military. However, the current version of the new Assembly bill is still missing appropriation language that would address Cuomo’s concerns about an unfunded mandate.

Things are looking better in the Senate, where earlier this month World War II and Korean War veteran Sen. William Larkin, Jr., introduced a bill that, unlike its Assembly counterpart, appropriates $31,500,000 of state funds toward its implementation.

That’s still well below Cuomo’s $57 million estimate, which has also been deemed unrealistically high in a memo attached to the Assembly bill, citing fiscal notes from public retirement systems.

“With the governor’s number, they’re assuming that 100% of all qualified veterans will take advantage of the bill all at once,” said Larkin’s counsel Robert Nickol in an interview with Task & Purpose. “We’re not of the opinion that any government program is that successful in letting people know it’s available and letting people purchase back service credit.”

McCawley believes the mere fact that veterans will have to pay a percentage of their current salaries to receive the pension service credit will prevent all of them from applying for the credit at the same time. “It’s not a free ride and not everybody has $8,000 to chip in,” he said, referring to the estimated amount he would have to pay at his experience level to receive credit for three years of his military service.

As negotiations continue before the Apr. 1 deadline for a final 2015–2016 fiscal year budget, the leaders of New York’s Senate and Assembly need to come to an agreement with the governor if they plan to include this bill in the budget with an adequate amount of state funding.

If there is no agreement by the beginning of April, supporters in both houses of the Legislature will face another uphill battle this spring to pass a version of the bill that won’t be vetoed when delivered to the governor’s desk. “The chances will greatly decrease if it doesn’t get in the budget because then we’ll kind of be in the same spot we were in last year,” Nickol said.

Fiscal critics of the proposed legislation who argue there should be a distinction between peacetime and wartime veterans, like the New York State Association of Counties and the New York State Conference of Mayors and Municipal Officials, are ignoring a major shortcoming in the current law. In a letter to Cuomo last year recommending he veto such legislation, New York City Mayor Bill de Blasio wrote, “the additional cost and the imperative to consider other urgent needs of all the City’s residents lead to the conclusion that the current law, which distinguishes between wartime and peacetime service, strikes an appropriate balance.”

The big elephant in the room that de Blasio isn’t talking about is that the current law doesn’t truly distinguish between wartime and peacetime veterans, unless he would have us believe Afghanistan for the last 14 years hasn’t been a war zone.

“This isn’t just for peacetime veterans. This is for people who have seen combat. … It’s unfair to the men and women who raised their right hand and said that they would do their job, and the state here is not doing their end of the bargain and helping our veterans,” Nickol told Task & Purpose.

New York is one of only six states whose pension systems limit credit by date and combat service, according to a memo attached to the Assembly bill. New York’s next door neighbor, New Jersey, allows any peacetime and wartime veteran to purchase as much as ten years of pension service credit, far greater than the three years New York’s state legislators are asking for.

The text of the Assembly bill states that it is impossible to determine the number of veterans who would be impacted because records don’t show how many are members of public retirement systems. The state estimates 88,000 veterans from New York have served in the wars in the wars in Iraq and Afghanistan. To omit the latter conflict from the current law is a disgrace not only to the thousands who have served there, but to the 491 New Yorkers wounded and 102 who lost their lives in that war.

Service members in peacetime put themselves in harm’s way constantly during dangerous training missions so they can be prepared for combat the moment a conflict arises, if one occurs. Why should he or she be granted less privileges than other veterans because of something beyond their control?

The Military Service Credit section of the state’s Retirement and Social Security Law should be amended so that all veterans, wartime and peacetime, are treated equally with the same privileges. Cuomo and the leaders of the Senate and Assembly should begin during this month’s budget negotiations by agreeing to appropriate an adequate amount of state funding as a compromise to opponents with fiscal concerns. It’s the best way to stop another veto. New York’s veterans who are members of public retirement systems shouldn’t have to wait any longer for a benefit they all deserve.