Active military and veterans gathered March 26, at the U.S. Capitol Visitor Center, in Washington, D.C., for the Improving Veteran’s... 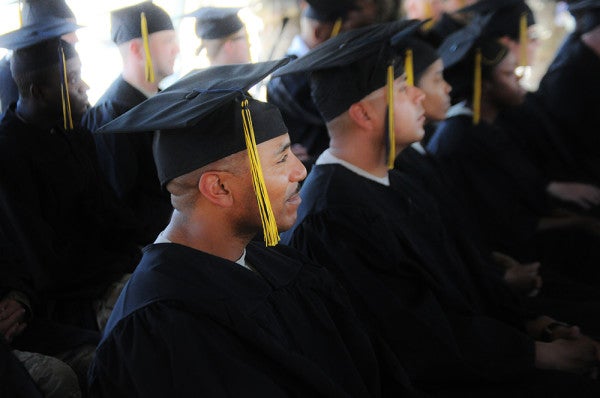 Active military and veterans gathered March 26, at the U.S. Capitol Visitor Center, in Washington, D.C., for the Improving Veteran’s Education Symposium. Hosted by National Louis University, the focus of the discussion was the college’s Education to Employment program, which was launched in 2012 with the help of a $750,000 grant from the Robert R. McCormick Foundation.

The university’s program was designed to meet the needs of transitioning veterans by providing holistic support reminiscent of the community that veterans had while in the military. At the heart of the program is the idea that student veterans and military-connected families will be more successful in an academic program that is designed for them, by those who understand their specific needs and culture.

“It is very intuitive, it is basically what we do in the military when you from one base to another, you’ve got that built-in support network,” explained Stephen Curda, the special advisor to the president on veterans education at National Louis University. “It allows the soldier, sailor, airman, Marine to focus on their job because all of the support networks were provided. Why can’t we do that to education as well?”

The program is designed to serve as a one-stop shop for student veterans through the use of “wrap-around” services that provide eight key support components in the following areas: academic, curriculum, finance (with an emphasis on VA benefits and financial literacy), career, mental health/social services, physical, spiritual, and legal.

“When a veteran comes back to school, they are focused. They have a specific goal in mind and we have to do everything we can to take care of some of the issues so that they can focus on their education,” continued Curda, explaining that NLU’s holistic model isn’t tied to a budget, and can even be done on the cheap, since it relies so heavily on community involvement.

“We don’t have the financial resources to provide all that internally. We provide certain things: academic support, career services, and so forth, but everything else comes from relationships and partnerships we’ve built within the community,” he said.

The symposium included a panel discussion with speakers from Robert R. McCormick Foundation, Gallup, Student Veterans of America, and the American Legion, with an overarching theme emphasizing the importance of developing programs now while there are still large numbers of veterans transitioning out of a wartime military.

Among the topics discussed were the importance of beginning transition training for military personnel early on in the military; the need to view veterans not as a monolithic group, but as a mosaic of individuals with a variety of needs; how to present veteran students as force multipliers to prominent schools; and the importance of continuing support networks from the military on to civilian life.

“If we don’t study this over the next few years, we’ll have to wait for the next war,” said David Goldich, a senior consultant at Gallup, and a Marine veteran.

“If you want to specifically measure transitioning combat veterans, particularly junior enlisted veterans who will separate after four years, eight years of service … you have to do it, right now,” said Goldich.

Part of the importance of developing programs like the one at NLU, and keeping track of how veterans perform, is to prepare for future generations of veterans returning from war.

“It’s important to measure how combat veterans are transitioning into the civilian sector, so that we know what works and what doesn’t, for whom and why,” said Goldich, adding that when future generations of veterans return from war, the country should be prepared with programs and systems designed for their needs and built for their success.