5 Lessons All Parents Should Teach Their Kids About Military Service

As a military spouse and mother of two military brats, I often feel like the black sheep in my military... 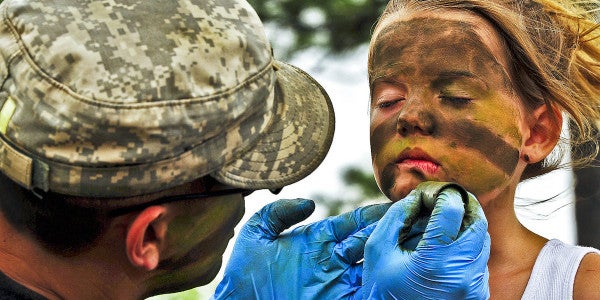 As a military spouse and mother of two military brats, I often feel like the black sheep in my military neighborhood because I wasn’t raised in the military. I didn’t move 10 times before the age of 18. I didn’t join the military out of high school. I don’t come from a legacy of service and duty to my country. I never imagined myself being married to a sailor.

Now 10 years after saying “I do” to six relocations, frequent separations, and on-base living, I can’t envision my life any other way.

Military life has shaped my life, but each day I choose to embrace it, I feel myself pulled inadvertently away from my civilian friends and family members. I completely agree with the theory of a growing gap between the military and civilians. I agree because I see it in my personal life.

My civilian friends just don’t get it. And if they don’t understand the military, there’s a slim chance their children will be like my husband and decide to join the military. Yet, I cultivate these relationships in part because of that military-civilian gap. I feel a responsibility to be an ambassador to the civilian world and teach civilians the truth about military life. And by teaching the parents, I hope they pass along this firsthand military life knowledge to their children, who may be the next generation of service members.

Here are five things all parents should teach their children about the military.

1. The military is a hugely diverse organization made up of volunteers who choose to serve their country for a variety of reasons.

Since 1973, our country has depended on an all-volunteer military force. These volunteers represent the diversity of the United States. According to 2013 demographics data, 30.7% of active-duty members identify themselves as a minority. This same report notes that “to conform to the latest Office of Management and Budget (OMB) directives, Hispanic is not considered a minority race designation and is analyzed separately as an ethnicity. Overall, 11.6 percent of the DoD Active Duty force is of Hispanic ethnicity.”

These volunteers may come from impoverished parts of the country and their choice to join the military leads to a way out of that cycle of poverty. Others maybe come from affluent neighborhoods who choose military service as a way to give back to their country. Some join after high school graduation. Some work for five years, get married, and then join the military. Others earn a college degree and then decide to serve their country. Some soldiers are women. Some are gay. Some are transgender. Some are the children of illegal immigrants.

Service members aren’t sheep or robots. While they may have the same haircut and wear the same uniform, they are still individuals. It’s important for our children to understand the diverse backgrounds of military members in case they want to consider the military as a career option. Too often, today’s young people are discouraged from military service because they feel like they won’t fit the military mold. They may be like my husband who didn’t grow up in a military family, so joining the Army instead of attending college may make them feel the black sheep in their family. Our children need to know that if they have the passion to serve their country, their country has a place for them.

Regardless of the reason, the decision to volunteer for military service is complex and deeply personal for every service member. Parents should encourage their children to take the time to ask veterans why they joined the military and why they continue to serve. Their answers will shed a light on their ambitions, motivations, and personal beliefs.

2. Not every service member is a warfighter.

When we visualize Marines, we almost always picture an infantryman carrying an M16. But our children need to know that it takes 12 Marines to support that one infantryman. Think communications. Think logistics. Think combat engineering. Think medics. In the military, one job isn’t more important than another job. Our service members work in tandem to carry out the mission swiftly and as safely as possible.

The military isn't just about fighting and war; it's an organization that offers opportunities to learn a wide variety of skill sets, including leadership, decision-making, and problem-solving. These experiences empower our veterans for the rest of their lives.

3. Military families have very few choices in their military life.

We don’t get to choose our military installations, even though civilians often think we do. Service members take orders and orders are not optional.

I often wonder if my civilian friends taught their children that lesson if their children would be a bit more tender-hearted toward my daughter. It could clear up a lot of uncomfortable questions on the playground when non-military children ask my daughter why she moves so much when they have lived in the same city their entire lives.

If the general U.S. population understood the lack of choices for military families, our civilian counterparts would be more receptive to supporting veterans and their families. Civilian children may be more open to starting friendships with military kids. These friendships may be the only real exposure civilian kids have to the military and may lead them to be more open to joining the military themselves or hiring a veteran to work for them. Acknowledging the personal sacrifices of military families helps bridge the growing gap between military and civilians in our country.

And while we are on the subject of perceptions, let’s clear up one more thing:

The media shows us snapshots of military life. It shows touching surprise homecoming videos that go viral on YouTube. National broadcasting companies show combat decisions half a world away and then analyze these decisions without context like a Monday morning sportscaster criticizing a NFL quarterback.

Popular movies paint broad strokes of military service and these coats color our service members as either heroes or traumatized veterans, when in fact, some are both, but many are neither.

There isn’t middle ground in the media. Instead there are moments. These moments aren’t a complete picture of the complexity of military life.

5. Military service is a family affair, which can at times, be challenging.

Many military families live far from their extended families. They can’t afford to fly home every 4th of July. Service members may work long hours because the DoD doesn’t shut down at 5 p.m. on Friday night. Military spouses frequently answer, “I don’t know,” to questions about where or when they will move next.

I realize that stress is part of everyone’s life, civilian or military. But studies have shown that the emotional stress of deployments and moving is taking a toll on our service members, their spouses, and children.

Approximately 18% of service members reported acute stress, depression, or anxiety when returning from deployment in Iraq and Afghanistan, according to a 2010 study. A detailed analysis published in the 2015 February issue of the Annals of Epidemiology found that the suicide rate among recent veterans was 50% higher than for nonmilitary civilian.

This stress is also a part of sacrifice that service members and their families make for our country. They carry a heavier load than others. They learn to handle the unexpected because military life is a life filled with unknowns.

Yet, despite all the difficulties that military life creates, the benefits often outweigh the challenges. That’s truly what parents need to teach their children about the military. Volunteering for the military, choosing to serve, and answering the call of duty isn’t a punishment. It’s a privilege.