Ellen Haring made a number of good points in her recent piece, “That Valor Isn’t Yours To Defend,” published here... 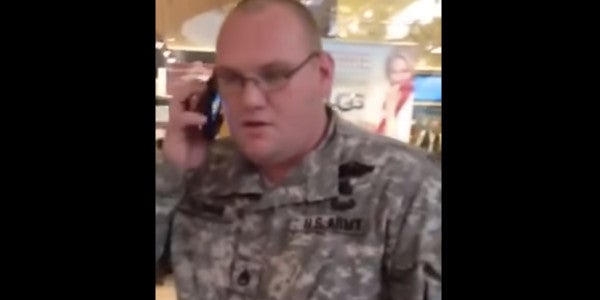 Ellen Haring made a number of good points in her recent piece, “That Valor Isn’t Yours To Defend,” published here on Task & Purpose. I would not and could not defend the actions of the Rangers physically assaulting someone just for wearing a uniform he did not earn the privilege to wear. We have to be careful as a society not to overindulge the egos of those in uniform and I am always quick to remind my soldiers that they're not special; the gratitude of society does not give them the right to break the laws they've sworn to defend. And “valor” is probably the wrong word to use when we talk about what’s stolen from veterans and actively serving military members whenever someone wears our uniform without having earned that right.

However, that’s about as far as my opinion overlaps with Haring’s. Valor may be the wrong word to use when describing what is stolen and what is sacrificed, but let’s not get fixated on a single word and beat it down like the straw man that it is. Perhaps respect, reputation, and trust would be more appropriate descriptions of what is stolen or potentially sacrificed every time someone pulls on a uniform they bought at the local Army-Navy store and was not issued during initial entry training or a rapid fielding initiative.

While I am simultaneously humble and leery of the sometimes gushing gratitude of many Americans, the American public is right to respect those who have volunteered to sacrifice their own lives and bodies for the freedom we all enjoy. The American public is right to respect the relatively small percentage of Americans who are physically, mentally, and morally capable of even meeting our basic enlistment requirements when so many cannot.

All professions abhor posers because true professions are self-policing and understand that the actions of one are often attributed to the many. But no other profession has such an easily discernable public image than the military and it’s because of the uniform we wear (while it could be argued that police also have a recognizable uniform, it's also illegal to imitate a police officer). You can’t really imitate a lawyer walking down the street. But everyone knows the uniforms of service members.

The ease of recognition makes our self-policing harder, but more important. Service members take great pride in their uniforms and appearance because we know that when we walk in public wearing the uniform, our appearance and actions represent everyone who legitimately wears that uniform. The same cannot be said for posers, who often have a slovenly appearance, detracting from the professional reputation of the armed services. Simultaneously, any behaviors or actions of those posers while they wear the uniform that do not reflect our values erodes our reputation and the trust the public has in its armed forces.

To write off the attention-seeking behavior of posers as “flattery” is disingenuous and a rather shallow analysis of underlying motivations. I haven’t seen examples lately of posers wearing the uniform while volunteering or conducting some community service. Instead, they’re caught in malls doing Christmas shopping, probably hoping that they’ll either get a discount or maybe someone with an overflowing respect for soldiers will do a good deed for the day and let them cut in line to check out faster. They’re caught in airports, probably hoping that all those stories of soldiers being upgraded to first class or having drinks bought for them at an airport bar are true. They’re caught at sporting events, probably hoping for some sort of special treatment that is sometimes bestowed upon veterans at those venues. They’re caught trying to use the trust and respect given to members of the military to gain access to middle schools to do things that I’d prefer not to speculate about.

The argument that there are no laws that prohibit anyone from claiming to be a doctor, firefighter, or police officer is a straw man. No one’s getting bent out of shape because someone’s merely claiming to be a soldier; they’re getting bent out of shape because they’re wearing a soldier’s uniform. And as it stands, it actually is illegal in many states and municipalities to impersonate police officers, firefighters (and here), and doctors. Some states, to their credit, recognize the inherent trust given to those in uniform and the danger posed by those who recognize and take advantage of it and have included military personnel in the list of people protected by public servant impersonation laws.

The embarrassment of the conduct of the Rangers in question for physically assaulting a poser is valid and their conduct should not be celebrated, but that should not be used as an excuse to exonerate those who wear a uniform they didn’t earn. As service members, we value integrity; it is paramount to our profession, which is probably one of the reasons why witnessing such obvious deficiencies in it just doesn’t sit right with us. Personally, I’m suspicious of anyone who either doesn’t recognize this as a violation of our values or tries to justify it.