Decision Making In Complex Environments Isn’t About Trusting Your Gut

You make decisions every day. Dozens and dozens of them. Some are easy — coffee or latte? — and some... 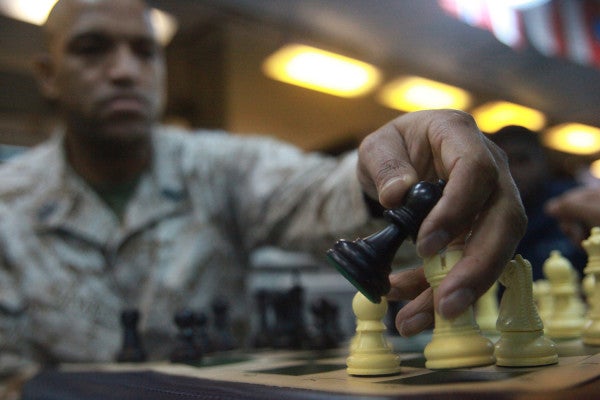 You make decisions every day. Dozens and dozens of them. Some are easy — coffee or latte? — and some are more complex. Regardless of what kind of decision you need to make, you generally have as much time and information as you need to make the best call.

In the military, though, decisions must be made both quickly and correctly. In combat, time and information are fleeting commodities, and waiting for more information to make a decision can have disastrous results.

Combat is a time-competitive environment, and every decision is made against an enemy who is doing his best to beat, and kill, you. John Boyd, an Air Force fighter pilot and later an innovative and impactful theoretician, spent his life studying, refining, and theorizing how to make the best decision. His conceptual decision-making model has proven tremendously effective in not just studying how decisions are made, but also to prepare people to make the best decisions.

In 1976, Boyd observed in his New Conception for Air-to-Air Combat presentation that “he who can handle the quickest rate of change survives,” and he formally presented the concept of his decisionmaking model known as the OODA loop that same year in his groundbreaking presentation titled “Patterns of Conflict.” Developed by Boyd after his time flying F-86s against MiG-15s in Korea, it is an elegant cycle that captures how those who succeed in combat make smart and successful decisions.

OODA stands for observe, orient, decide, and act. More specifically, each of these actions means:

The decisions that military professionals make in combat are overwhelmingly focused on one thing: the taking of human life. You can call it anything you want — “accomplishing the mission,” “destroying the target,” “seizing the objective,” or “self preservation” — when you get down to the point, the lives of friends, foes, and those unlucky enough to be in the crosshairs hang in the balance each and every time the decision is made to press the “fire” button, pull the trigger, or abort an attack.

As a young Marine lieutenant, Boyd’s theories were beaten into my head by my instructors at The Basic School. Everything we did was presented as a problem that we had to solve and no solution was ever simple. “What now, lieutenant?” preceded every problem that we faced, and as soon as a call was made, that annoying question popped back up.

We were not taught theory by repetition, nor were we expected to spout off doctrine and tactics chapter and verse from the various manuals that we studied, but instead were expected to make a plan and then execute it. With every decision we made we received feedback from our instructors and our peers, and with that feedback our experience grew. When we first learned how to fire our rifles, the only decision that we had to make was to pull the trigger when the sights were centered on the target. As we learned to employ our rifles, we discovered where the bullet went was less important than the decision to send it there; with each practice attack our ability to make better decisions improved.

“What now, lieutenant?” was the question that we learned to ask ourselves as we trained, and over time, it became the mantra that guided the way we thought as military professionals. By asking ourselves “What now?” we were forced to always focus on our environment in the manner that Boyd espoused. We were always looking and listening and planning and preparing while we were on the lookout for the stimulus that caught our attention so that we could focus, or orient on it. If whatever it was that caught our eye was significant, we pushed it through our perceptual filter of the orientation phase in order to determine if it required action. If not, we went straight back into the observation phase.If action was warranted, we formed the best hypothesis possible in the form of a decision, and then at the appropriate time, we would put it into action.

Countless after-action reviews deconstructed our decisions and actions, which reinforced our ability to become better and better decision makers. As training exercises yielded to combat operations, the way we thought and made decisions remained rooted in the lessons we learned as young gold bars taking our lumps in the forests and swamps of Quantico.

A decade ago, my team was on a mission in the Iraqi city of Ramadi. The insurgency was at its height, and we were fighting hard on a daily basis in our attempt to control the city of 400,000. At the time, many of the insurgents wore hoods to protect their identity, and the rules of engagement were such that if you positively identified a target carrying a weapon and hiding his identity behind a mask, then you could engage them. What was also happening, however, was the creation of a nascent Iraqi police force that was being recruited from local tribes to protect themselves from insurgent activity. These new policemen also had to protect themselves from identification because al Qaeda would kill them and their families if their identities were discovered, and they did so by wearing masks.

While on patrol, my team turned a corner and identified two Iraqi men armed with AKs and an RPG less than 50 feet away. Startled, they turned toward us and assumed a tactical position as our gunners immediately called them out as targets and slewed the turrets of our Humvees to engage them.

There were a dozen reasons to open fire on them, and a couple of reasons not to. In less time than it takes to read this paragraph, I had to decide whether to open fire on the Iraqis or to let them live. What did they look like? What weapons did they have? What part of town were we in? What time of day was it? What were the insurgent tactics, techniques, and procedures? Why were two armed Iraqis standing on a street corner where they were not supposed to be?

I decided not to engage. Our gunners were initially enraged at the call because we rarely had what appeared to be such a clear target, but a few seconds later, they were relieved when the Iraqis lowered their weapons and waved.

We had encountered our first Iraqi police checkpoint.

To this day I cannot pick out a single attribute of that event that made me stop our gunners from firing. It just didn’t feel right, and sure enough it wasn’t.

The difference between an amateur and a professional is doing the right thing because you’re trained to know the right decision. In the military, you have to be right with little time and scant information or the wrong people die. There is no room in the cockpit for an amateur.